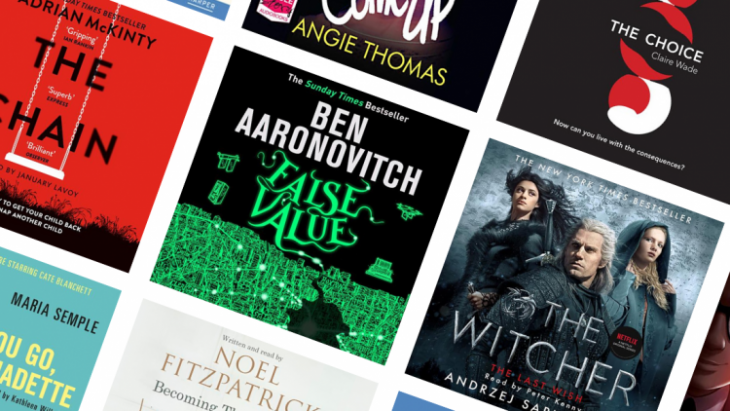 A Sneak Peak into Our Upcoming New Titles

We’ll soon be adding lots of new titles to both our online and CD catalogues - some that are at the top of the book’s charts, some by brilliant debut authors and some that have been requested by Listening Books’ members. We know that you might be craving new audiobooks more than usual at the moment (we know we are!), so here’s a little taste of what’s coming to our catalogue very soon!

The Chain by Adrian McKinty

Everyone has been talking about this compelling, rollercoaster of a read since it was released last summer.  We won’t say too much about it – except for that the ‘chain’ of the title refers to a succession of parents whose children have been kidnapped, and the only way to free them is to abduct someone else’s child. Stephen King calls it ‘incredibly propulsive and original’ and Steve Cavanagh says 'I may not read a better thriller in my lifetime.' Sounds like the perfect book to get hooked on this summer!

The inspiration behind last year’s film starring Cate Blanchett – Where’d You Go, Bernadette - is an addictive, moving novel about a genius who hasn’t quite found her place in the world. Seen as a revolutionary architect in the design world, a menace by other mothers at the school gates and a best friend by her 15-year-old daughter Bee, Bernadette Fox is notorious in more ways than one. Then Bernadette disappears. And Bee must take a trip to the end of the earth to find her.

The Big Over Easy by Jasper Fforde

The first in Fforde’s delightfully eccentric  Nursery  Crimes series. It's Easter in Reading - a bad time for eggs - and no one can remember the last sunny day. Humpty Dumpty, well-known nursery favourite, large egg, ex-convict and former millionaire philanthropist, is found shattered beneath a wall in a shabby area of town. Following the pathologist's careful reconstruction of Humpty's shell, Detective Inspector Jack Spratt and his Sergeant, Mary Mary, are soon grappling with a sinister plot involving cross-border money laundering, the illegal Bearnaise sauce market, corporate politics and the cut and thrust world of international chiropody.

On the Come Up by Angie Thomas

Angie Thomas’ powerful debut The Hate U Give was an international success and has already been adapted into a movie. It looks like the YA author’s second book will follow the same path. It tells the story of Bri - the daughter of an underground hip hop legend who died just as fame was around the corner. When Bri releases her own track it goes viral for all the wrong reasons, and she finds herself at the centre of a controversy. With her family under financial strain she knows she has to make it - even if it means becoming the very thing the public has made her out to be.

Step by Step by Simon Reeve

Simon Reeve has lived a life of amazing adventures in over 120 countries and travelled to some of the most remote locations on Earth.  After a decade spent making more than 80 programmes he has become a familiar face on British TV, well known for his extraordinary expeditions to some of the most beautiful, dangerous and remote regions of the world. This inspiring audiobook captures Simon’s incredible experiences and also reveals the details of how Simon's own journey started - in a rough area of Acton, West London where he left school with no qualifications. For the first time he will tell his life story with an audiobook rich in anecdotes to entertain and inform listeners about some of the most fascinating (and often dangerous) places in the world, and what it took to reach them.

The Choice by Claire Wade

Author Claire Wade is the winner of The Good Housekeeping First Novel Competition and The Choice is her expertly-crafted debut about a nanny state that’s lost control. Wade has created a world where everything you ate was monitored by the government, every step you took was counted, your children were weighed every day at school, sugar was illegal, and baking was a crime. The novel asks the question; if that world was here...What would you do? Toe the line or fight for your freedom...

The Witcher Series by Andrzej Sapkowski

We’re so excited to have these books in our catalogue we didn’t want to just include the first one in our list, we wanted to tell you about the entire series! Geralt is a witcher, a man whose magic powers and extensive training have transformed him into a brilliant and merciless assassin. His victims are seemingly the evil that prey on the innocent, but he gradually learns that some of them are victims themselves. Now a major Netflix series, why not work your way through the books before you get stuck into the show?

Listening to Animals by Noel Fitzpatrick

If you love watching the Supervet on TV, then Noel Fitzpatrick’s inspiring memoir will be the perfect listen for you! Noel chronicles his often surprising, challenging but ultimately uplifting journey from working in a rural farm practice in Ireland to setting up Fitzpatrick Referrals in Surrey, where he’s been a pioneer in veterinary research and practise. This wonderful book not only tells Noel’s intriguing story, but also celebrates the special bond between animals and their humans.

The Fowl Twins by Eoin Colfer

The first in the new series by children’s author Eoin Colfer, about Artemis Fowl’s younger brothers, Myles and Beckett! A week after their eleventh birthday the twins befriend a troll on the run from a nefarious nobleman after their house security system, NANNI, fails to look after them for the night.  The twins and their new troll friend escape, get kidnapped, buried, arrested, threatened and killed (temporarily) . . . and discover that you won’t find the world’s strongest bond in an atom, you’ll find it between a pair of twins.

The hugely anticipated 8th book in the Rivers of London series! Peter Grant is facing fatherhood, and an uncertain future.  Leaving his old police life behind, he takes a job with Silicon Valley tech genius Terrence Skinner's new London start up: the Serious Cybernetics Corporation. Compared to his last job, Peter thinks it should be a doddle. But magic is not finished with the Met's first trainee wizard in fifty years...because a secret is hiding somewhere in the building. A secret that is just as magical as it is technological - and twice as dangerous.

If you’d like to listen to the rest of the Rivers of London books, we have them available to borrow online and on MP3 CD.

We’ll be adding these titles, and plenty of others, to our download catalogue within the next month. It will take us a little longer to add them to our CD library due to Covid-19 staff limitations, but we will do so as soon as we can! If you'd like to browse through all our newest audiobooks check out our most recently added titles on our site.

⭐ Winner of a @goodreads choice award for fiction⁠
⭐ Shortlisted for @_thebookseller fiction and audiobook of the year awards⁠
⭐ @audiobooks Audies finalist in fiction audiobook of the year ⁠
⁠
If you haven't discovered The Midnight Library by @mattzhaig yet then borrow the audiobook from our library - read by Carey Mulligan! Find the link in our bio. ⁠
⁠
⁠
ID: a background that gradients between pastel yellow to blue with the audiobook cover of The Midnight Library in the centre⁠
⁠
⁠
#audiobook #audiobooks #audiobookstagram #matthaig #themidnightlibrary #careymulligan #listeningbooks #goodreads #thebookseller #goodreadschoiceawards #audiobookoftheyear #audies #audies2021 #thebookseller #nibbies #fiction #booksbooksbooks #igreads #bookstagram #bibliophile #audio