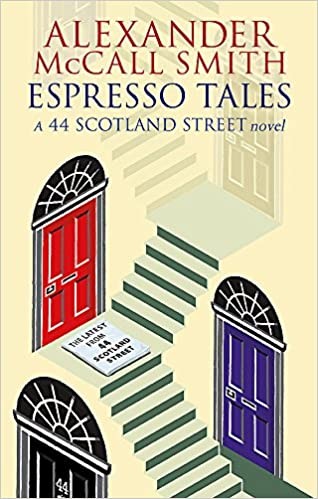 
This audiobook returns to the residents of '44 Scotland Street' (0244CD), with a new set of challenges for each one of them. Bruce, the intolerably vain and perpetually deluded ex-surveyor, is about to embark on a new career as a wine merchant, while his long-suffering flatmate Pat MacGregor, set up by matchmaking Domenica MacDonald, finds herself invited to a nudist picnic in Moray Place in the pursuit of true love. Prodigious six-year-old Bertie Pollock wants a boy's life of fishing and rugby, not yoga and pink dungarees, and he plots rebellion against his bossy, crusading mother Irene and his psychotherapist Dr Fairbairn. But when Bertie's longed-for trip to Glasgow with his ineffectual father Stuart ends with Bertie taking money off legendary Glasgow hard man Lard O'Connor at cards, it looks as though Bertie should have been more careful what he wished for. And all the time it appears that both Irene Pollock and Dr Fairbairn are engaged in a struggle with dark secrets and unconscious urges of their own.

To the casual observer, the great enlightened city of Edinburgh, home of no-nonsense philosophers and cream teas, might appear immune to the rollercoaster of strong emotions. But at 44 Scotland Street, as Matthew and Elspeth embark on the risky enterprise of married love, the raffish portrait painter Angus Lordie has a premonition of disaster. And...

A novel about love and following one's heart, and the unexpected places to which this can lead us. At the age of four Clover chooses her own name. Aged six, she falls in love with her best friend, James. But in the adult world, things are not so simple: Clover's mother finds she's fallen out of love with her husband, and realises that James's fathe...

With his characteristic warmth, inventiveness and brilliant wit, Alexander McCall Smith gives us more of the gloriously entertaining comings and goings at 44 Scotland Street, the Edinburgh townhouse. Six-year-old prodigy Bertie perseveres in his heroic struggle for truth and balanced good sense against his insufferable mother and her crony, the psy...

The story revolves around the comings and goings at No. 44 Scotland Street, a fictitious building in a real street in Edinburgh. Immediately recognisable is the Edinburgh chartered surveyor, stalwart of the Conservative Association, who dreams of membership of Scotland's most exclusive golf club. There is the pushy Stockbridge mother and her prodig...

Jenny is very tall for her age, and when she dresses smartly for her first day at a new school, she looks very grown-up indeed. So grown-up, in fact, that when she arrives at the school, she is mistaken for a new teacher, and left in charge of a classroom of kids! Jenny is forced to keep up the act, and soon finds herself in all sorts of tricky sit...

Scotland Street witnesses the wedding of the century of Angus Lordie to Domenica Macdonald, but as the newlyweds depart on honeymoon Edinburgh is in disarray. Recovering from the trauma of being best man, Matthew is taken up by a Dane called Bo, while Cyril eludes his dog-sitter and embarks on an odyssey involving fox-holes and the official residen...

44 Scotland Series Book 6: The Importance of Being Seven

44 Scotland Series Book 6: The Importance of Being Seven

Despite inhabiting a great city renowned for its impeccable restraint, the extended family of 44 Scotland Street is trembling on the brink of reckless self-indulgence. Matthew and Elspeth receive startling - and expensive - news on a visit to the Infirmary, Angus and Domenica are contemplating an Italian m&sbquo;nage a trois, and even Big Lou is ov...

Alexander McCall Smith's delightful series of novels form the basis of these radio dramas featuring the inhabitants of an Edinburgh tenement building. With its multiple-occupancy flats, Scotland Street is an interesting corner of Edinburgh's New Town. Verging on the Bohemian, here the haute bourgeoisie rubs shoulders with students and the more colo...

The Careful Use of Compliments

The Careful Use of Compliments

For philosophically-minded Isabel Dalhousie, editor of the Review of Applied Ethics, getting through life with a clear conscience requires careful thought. And whilst juggling the arrival of baby Charlie, a passionate relationship with his father Jamie, a truce with her furious niece Cat, and struggles for authority over her son with her formidable...

The No 1 Ladies Detective Agency 10: Tea Time For the Traditionally Built

The No 1 Ladies Detective Agency 10: Tea Time For the Traditionally Built

It is a troublesome fact on which even Mma Ramotswe and her assistant Mma Makutsi agree: there are things that men know and ladies do not, and vice versa. It is unfortunate, for example, when Mma Ramotswe's newest client is the big-shot owner of the ailing Kalahari Swoopers, that one thing lady detectives know very little about is football. And whe...