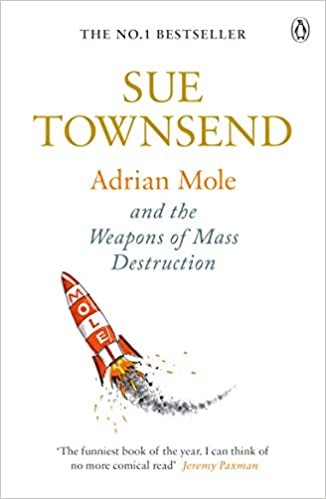 Adrian Mole and the Weapons of Mass Destruction


He's back. Mole, now an angst-ridden 38, is still coping with life in middle-England as a single parent to Glenn and William, and battling his own particular weapon of mass destruction. 'Marigold and I quarrelled last night as to which of us has the most monstrous mother. Glenn rang at 2am from somewhere in Iraq to say that his standard issue army boots had melted in the desert heat and could I get Parcel Force to rush him some size ten Timberlands'. SOME STRONG LANGUAGE AND ADULT THEMES

Sue Townsend, creator of the much-loved Adrian Mole series, tells a compassionate and gritty story of love and loss in Ghost Children. Seventeen years ago Angela Carr aborted an unwanted child. The child's father, Christopher Moore, was devastated by the loss and retreated from the world. However, when he makes a horrifying discovery on the heath,...

The Secret Diary of Adrian Mole Aged 13 and 3/4

The Secret Diary of Adrian Mole Aged 13 and 3/4

Adrian Mole is having a hard time, trying to deal with his parents' crumbling marriage, his spots, his school, his unrequited love for Pandora and the erratic behaviour of his dog.

Adrian Mole is now thirty and three-quarters. An accidental celebrity, with a spreading bald patch, despairing of family values, Mole is still worrying: Is Viagra cheating? Why won't the BBC produce his serial killer comedy 'White Van'? Mole chronicles the closing years of the 20th century with slanderous abandon.

Adrian Mole is 39 and a quarter. Due to his financial situation he has been forced to move next door to his parents. And his numerous nightly visits to the lavatory lead him to suspect prostate trouble. As his worries multiply, a phone call to his old flame ignites powerful memories and makes him wonder - is she the only one who can save him now?

Adrian Mole is an adult. At least that's what it says on his passport. But living at home, clinging to his threadbare cuddly rabbit 'Pinky', working as a paper pusher for the DoE and pining for the love of his life, Pandora, has proved to him that adulthood isn't quite what he expected. Still, without the dilemmas of modern life what would an intel...