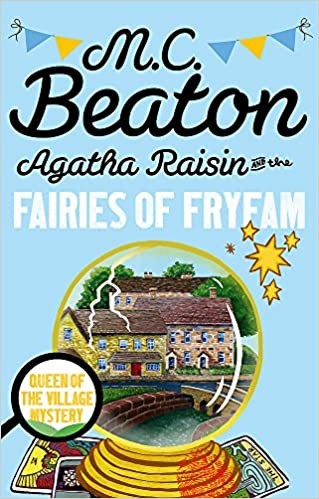 
Agatha's away with the fairies... And the little folk are causing big trouble for her! Angry at being jilted by new husband James, Agatha follows a fortune-teller's advice and rents a cottage in pretty Fryfam. There, she hopes, true love will come chasing after her. But her romantic notions are dispelled by a series of odd goings-on in the village: strange lights start appearing in her back garden, there are thefts of paintings and pottery and her beloved cats vanish. And then the local squire is found dead. Agatha's nose for trouble ensnares her in a maelstrom of jealousy, blackmail and dangerous liaisons, especially with a murderer who plans to keep irrepressible Agatha permanently in Fryfam - as a resident corpse.

'The Wizard of Evesham': Agatha is alarmed when her new wizard of a hairdresser seems keen to take on more than just her split ends. She soon discovers that everyone in his salon has a secret and that he practices a very dark magic indeed. 'The Moment of Truth': Agatha must quickly discover the identity of the prisoner, but James is refusing to hel...

A newcomer to the village, Mary Fortune, is discovered murdered. Agatha seizes the moment and immediately starts yanking up village secrets by their roots and digging the dirt on the victim. But the problem is, Agatha has an awkward secret of her own.

Almost bigamy and absolute murder - Agatha's life is never dull . . . The morning of Agatha's longed-for marriage to James Lacey dawns bright and clear. But her luck runs out in the church when Jimmy, the husband she had believed long dead, turns up large as life and twice as ugly. Agatha has a go at strangling him. It's all too much for James, who...

Agatha Raisin and the Witch of Wyckhadden

Agatha Raisin and the Witch of Wyckhadden

Left with bald patches thanks to the wicked doings of a murderer from a previous investigation, Agatha flees to the coastal resort of Wyckhadden to grow her tresses back in privacy. When a local witch provides her with hair tonic, Agatha's hair begins to flow - but the witch is found bludgeoned to death. The odd elderly residents who inhabit Agatha...

Agatha Raisin's detective agency has become so successful that she decides to take time off for rest and relaxation. But as soon as she does, she remembers that when she does have time on her hands, she doesn't know what to do with it. So it doesn't take much for the vicar of a nearby village to persuade her to help publicize the church fete - espe...

Agatha Raisin and the Terrible Tourist

Agatha Raisin and the Terrible Tourist

Cold-blooded murder heats up Agatha's Greek holiday. In this outing Agatha travels to the North of Cyprus, only to contend with her estranged fiance, an egregious group of truly terrible tourists, and a string of murders as scorching as the Greek sun...

Agatha Raisin and the Deadly Dance

Agatha Raisin and the Deadly Dance

Can the feisty Agatha cut it as a private investigator? She soon learns that running her own detective agency in the Cotswolds is not quite like starring in a Raymond Chandler movie. But then walks in wealthy divorcee Catherine Laggat-Brown, and Agatha is given her first real case. Death threats, blackmail and physical attack soon follow, and once...

The latest Agatha Raisin mystery from best-selling author M. C. Beaton. The team of bells at St. Ethelred church is the pride and glory of the idyllic Cotswolds village of Thirk Magna, together with the most dedicated bell ringers in the whole of England: the twins Mavis and Millicent Dupin. As the village gets ready for the Bishop's visit, the twi...

THE TERRIBLE TOURIST: Now that their marriage plans have collapsed, Agatha is furious to find that James is taking a holiday on the island where they were to have their honeymoon. But when she sets out in pursuit of him, she stumbles upon another murder. THE FAIRIES OF FRYFAM: Having been hurt by James once too often, Agatha takes a trip to the Cor...