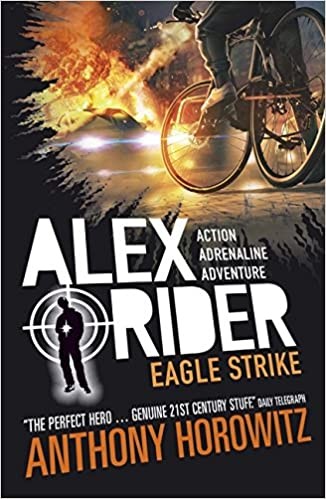 
SKELETON KEY: The third book in the Alex Rider series. Reluctant superspy Alex Rider faces his most dangerous challenge yet. On a private island near Cuba, the power-hungry Russian General Sarov is hatching explosive plans to rewrite history. Alone, and equipped only with a handful of ingenious gadgets, Alex must combat sharks, assassins and nuclear bombs... EAGLE STRIKE: The fourth book in the Alex Rider series. Relaxing in the South of France, Alex Rider is suddenly plunged back into a world of mystery and excitement - but this time, MI6 don't want to know. Alex is led to a long-buried secret - and a discovery more terrible than anything he could have imagined.

Following the shocking events of Never Say Die, Alex Rider's world has changed: his biggest enemy, the evil organization Scorpia, has been destroyed. Alex is hoping his life can finally go back to normal, that he can go to school and spend time with his friends&mdash;but very quickly everything changes. A new and dangerous criminal organization&mda...

The second book in the Alex Rider series. Alex Rider, reluctant MI6 spy, is back at school trying to adapt to his new double life.But M16 have other plans for him. Investigations into the `accidental' deaths of two of the world's most powerful men have revealed just one link. Both had a son attending Point Blanc Academy. Alex must infiltrate the ac...

Alex Rider's eighth, adrenaline fueled adventure in the number one bestselling series. In the eighth book in the number one bestselling Alex Rider series by Anthony Horowitz, Alex meets international do-gooder Desmond McCain. But a simple card game between them rapidly leads to a duel to the death &ndash; one that could result in the destruction of...

Undercover in a poisonous world, teen spy Alex Rider is back for his seventh adrenalin-rush adventure! In the seventh book in the number one bestselling Alex Rider series by Anthony Horowitz, teenage spy Alex is forced into the Australian secret service. His target is the criminal underworld of South East Asia, and a ruthless organization known as...