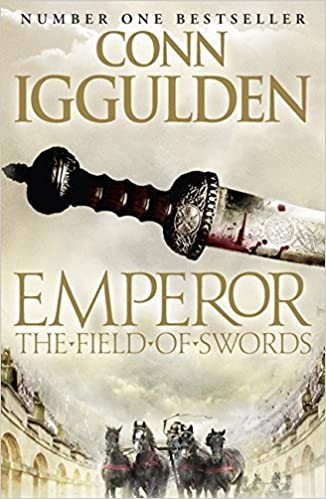 Emperor: The Field of Swords


Following the defeat of the Spartacus rebellion, Julius Caesar and Marcus Brutus, who have been sent to run the Roman colonies in Spain, return to challenge powerful senators to become one of the Consuls of Rome. As he takes the legions north into mighty battles with the Gallic tribes, the imperious stand of Caesar and the leadership of his men, his new friendships with fellow leaders and his overwhelming ambition begin to separate him from Brutus, the great swordsman and warrior. THIS AUDIOBOOK CONTAINS STRONG LANGUAGE AND/OR ADULT THEMES.

Penguin presents the audiobook edition of Darien by C.F. Iggulden, read by Daniel Weyman. TWELVE FAMILIES. ONE THRONE. WELCOME TO THE EMPIRE OF SALT. The city of Darien stands at the weary end of a golden age. Twelve families keep order with soldiers and artefacts, spies and memories, clinging to a peace that shifts and crumbles. The people of the...

A remarkable story of heroism and adventure, of a boy who had to become a man too soon, of a family and a tribe who had to learn to win to survive. A man without a tribe was at great risk, so the young boy abandoned with his siblings on the harsh Mongolian plains had to struggle to avoid death. He survived both starvation and hostile attacks by lea...

From the spectacle of gladiatorial combat to the intrigue of the Senate, from the foreign wars that created an empire to the political conflict that almost tore it apart, this audiobook is the first volume in an epic tale which begins the story of the man who would become the greatest Roman of them all: Julius Caesar. CONTAINS STRONG LANGUAGE AND/O...