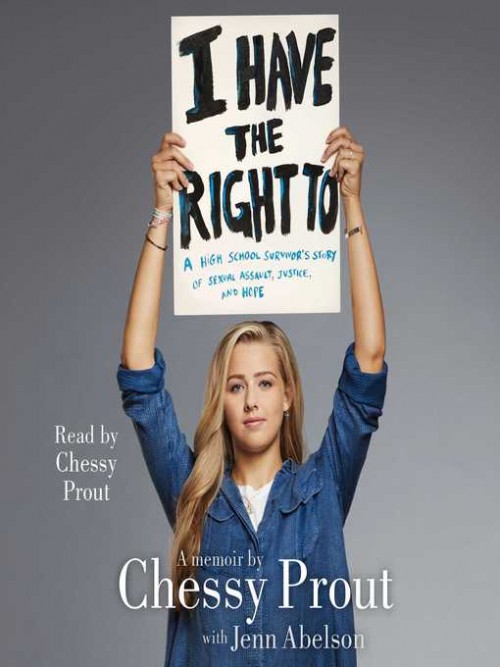 I Have the Right To


A young survivor tells her searing, visceral story of sexual assault, justice, and healing in this gutwrenching memoir. The numbers are staggering: nearly one in five girls ages fourteen to seventeen have been the victim of a sexual assault or attempted sexual assault. This is the true story of one of those girls. In 2014, Chessy Prout was a freshman at St. Paul's School, a prestigious boarding school in New Hampshire, when a senior boy sexually assaulted her as part of a ritualized game of conquest. Chessy bravely reported her assault to the police and testified against her attacker in court. Then, in the face of unexpected backlash from her once-trusted school community, she shed her anonymity to help other survivors find their voice. This memoir is more than an account of a horrific event. It takes a magnifying glass to the institutions that turn a blind eye to such behavior and a society that blames victims rather than perpetrators. Chessy's story offers real, powerful solutions to upend rape culture as we know it today. Prepare to be inspired by this remarkable young woman and her story of survival, advocacy, and hope in the face of unspeakable trauma.

A timely and heartfelt collection of essays inspired by the #MeToo movement, edited by acclaimed young adult and middle-grade author Janet Gurtler. Featuring Beth Revis, Mackenzi Lee, Ellen Hopkins, Saundra Mitchell, Jennifer Brown, Cheryl Rainfield, and many more. When #MeToo went viral, Janet Gurtler was among the millions of people who began to...

This nonfiction self-help book for young listeners with disordered eating and body-image problems delivers real talk about eating disorders and body image, tools and information for recovery, and suggestions for dealing with the media messages that contribute so much to disordered eating. You Are Enough answers questions like these: What are eating...

For fans of Grace Helbig and Alexa Chung comes a fresh, hilarious guide to growing up your way from social media influencer and lifestyle vlogger Arden Rose. In Almost Adulting-perfect for budding adults, failing adults, and eaters of microwave mug brownies-Arden tells you how to survive your future adulthood. Topics include: Making internet friend...

Mayim Bialik, star of The Big Bang Theory and author of the #1 bestseller Girling Up, puts her Ph.D. to work to talk to teen boys about the science and pressures of growing up male in today's world. A must-have book for all teenage boys! Why does my voice crack like that? What should I eat to build muscle? How do I talk to someone I have a crush on...

PERIOD founder and Harvard College student Nadya Okamoto offers a manifesto on menstruation and why we can no longer silence those who bleed-and how to engage in youth activism. Throughout history, periods have been hidden from the public. They're taboo. They're embarrassing. They're gross. And due to a crumbling or nonexistent national sex ed prog...

Welcome to Girl Mogul! No matter who you are or where you come from, this audiobook can help you define success, envision it, and make it happen-in school, in your personal life, and at work. Get ready to awaken all the awesomeness that is already inside of you. You are fierce. You are bold. You are unique. You are driven. You are inspiring. YOU AR...

I Don't Want To Be Crazy

I Don't Want To Be Crazy

A harrowing, remarkable poetry memoir about one girl's struggle with anxiety disorder. This is a true story of growing up, breaking down, and coming to grips with a psychological disorder. When Samantha Schutz first left home for college, she was excited by the possibilities-freedom from parents, freedom from a boyfriend who was reckless with her a...

Don't let your inner critic get in the way of being confident! How to Like Yourself offers a quirky, inspiring, and practical guide to help you overcome feelings of self-criticism, improve self-esteem, and be the true star in your life. With all the pressures of school, friends, and dating, you're especially vulnerable to low self-esteem in your te...

It's Not Ok To Feel Blue (and Other Lies)

It's Not Ok To Feel Blue (and Other Lies)

Everyone has a mental health. So we asked: What does yours mean to you? THE RESULT IS EXTRAORDINARY. Over 60 people have shared their stories. Powerful, funny, moving, this book is here to tell you: It's OK. With writing and audio from a collection of collaborators including: Adam Kay - Alastair Campbell - Alexis Caught - Ben Platt - Bryony Gordon...