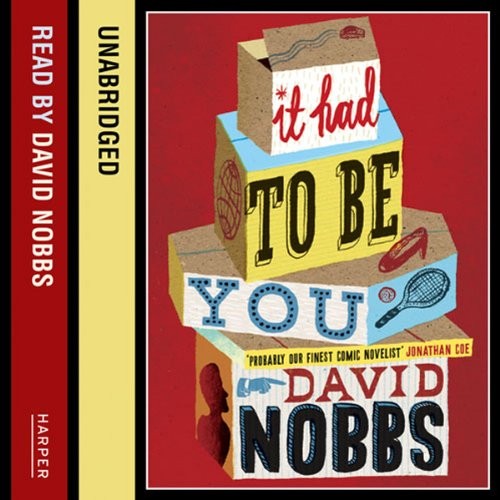 
It Had to Be You reaffirms Nobbs as the best writer of comedy and observer of the nuances of human nature that there is today.One man, five very different women. James Hollingshurst is a man shaped by those who surround him. And in James's case, it's some very different women. Be it his trusty wife Deborah, his hapless PA Marcia or his ex-girlfriend Jane. And there's one woman in James's life who looks set to upset the status quo. But a tragic accident is about to shake the bedrock of life as James knows it. An event sets a train in motion, which will challenge everything he's ever known and everyone he's ever loved. It will also bring his beloved daughter, Charlotte who he has not seen for fifteen years, tantalisingly close to him.

It is a quiet Saturday morning in the Hinchcliffe home. Tony and Sal, tired after a week of work, have time on their hands. But not for each other. Middle-aged and middle class, they haven't had kids and they still feel that emotional vacuum. The doorbell rings. It is an American couple-Monty and Janey-a rather loud duo they stayed with in Delaware...

Rod Millet has always dreamed of working at the Maltby Collection. He used to visit as a teenager, when he lusted after Whistler's Sister, and his Mother, Rod wasn't picky back then. On becoming the Museum's Deputy Curator of Painting and Sculpture, however, it quickly becomes apparent that the chavvy son of a self-made biscuit mogul isn't going to...