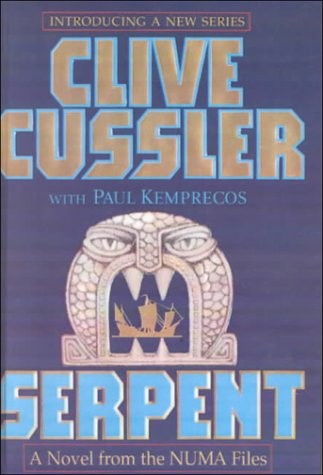 
When Kurt Austin, the leader of a courageous National Underwater & Marine Agency exploration team, rescues beautiful marine archaeologist Nina Kirov off the coast of Morocco, he becomes the next target of Texas industrialist Don Halcon. A madman bent on carving a new nation out of the southwestern United States and Mexico, Halcon's scheme hinges on Nina's recent discovery involving Christopher Columbus, and a priceless pre-Columbian antiquity buried in the battered remains of the sunken Italian luxury liner Andrea Doria. Only Kurt Austin and his crack NUMA team stand between Halcon and the Andrea Doria's silent steel hull - and if their deadly mission fails, Halcon will ride to power on a wave of death and destruction.

The fantastic fourth Dirk Pitt classic from multi-million-copy king of the adventure novel, Clive Cussler. A tidal wave of pounding excitement from start to finish...Two and a half miles beneath the icy North Atlantic, the mighty Titanic holds the key to the safety of the free world. The Americans want it. So do the Russians. Ace maritime troublesh...

The amazing second Dirk Pitt classic from multi-million-copy king of the adventure novel, Clive Cussler. Major Dirk Pitt picked up the frantic distress call as he cruised his lumbering amphibious plane over the islands of the Aegean. Brady Air Force base was under fire, its entire force of jets destroyed on the ground...by just one First World War...