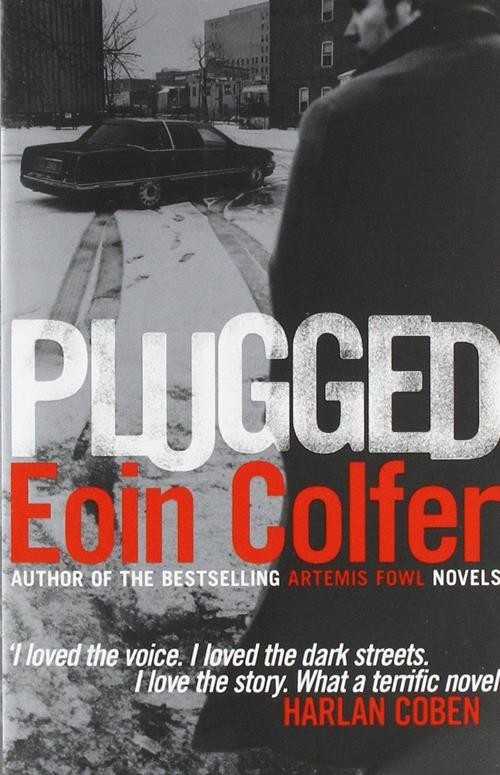 
Dan, an Irishman who's ended up in New Jersey, finds himself embroiled in a world of murder, kidnapping and corrupt cops. Dan works as a bouncer in a seedy club, half in love with hostess Connie. When Connie is murdered on the premises, a vengeful Dan finds himself embroiled in an increasingly deadly sequence of events in which his doctor friend Zeb goes mysteriously missing, a cop-killing female cop becomes his only ally, and he makes an enemy of ruthless drug-dealer Mike Madden. Written with the warmth and wit that make the Artemis Fowl novels so irresistible, though with additional torture and violence, Plugged is a brilliant crime debut from a naturally gifted writer with a huge fanbase. THIS AUDIOBOOK CONTAINS SOME EXPLICIT SCENES/LANGUAGE.

Artemis Fowl is attempting to go straight. But there's always time for one last job. Artemis Fowl has created the most powerful new supercomputer known to man - using stolen technology from an elite race of underground fairies. And when the computer falls into the hands of an IT billionaire with a shady past and an alleged mob connection, Artemis i...

Has criminal mastermind Artemis Fowl met his match? Until recently Artemis Fowl was the only human to have discovered that fairies do exist. But now a second juvenile genius wants to capture one for scientific study - and not just any old fairy. The newcomer intends to trap a demon, the most human-hating species unknown to man. Only an ancient time...

Someone has been supplying Class A illegal human power sources to the goblins. Captain Holly Short of the LEPrecon Unit is sure that her arch-enemy, thirteen-year-old Artemis Fowl, is responsible. But is he? Artemis has his own problems to deal with: his father is being held to ransom and only a miracle will save him. Maybe this time a brilliant pl...

Evil pixie Opal Koboi is back and she's more dangerous than ever. This time she doesn't just want power over the fairy People-this time she wants the humans too. Captain Holly Short is the only fairy with a hope of stopping her, but as Holly knows, it takes one genius criminal mastermind to fight another. But the 14-year-old genius that Holly is th...

Artemis Fowl is no stranger to trouble. In fact he's a magnet for it. Man-eating trolls, armed and dangerous (not to mention high-tech) fairies, flame-throwing goblins - he's seen the lot. He had decided to forego criminal activity of the more magical kind. However . . . Now his mother is gravely ill. He must travel back through time to steal the c...

Mary loathes her big, curly, bushy hair and so she chops it all off...and she looks fantastic! But her mammy is not convinced and forbids her from ever cutting her own hair again. But she didn't say anything about anyone else... Little Lucja's Grandpa Feliks plans to have a tasty Christmas Eve dinner of carp. But when the carp arrives alive and tak...

Will the real Artemis Fowl please stand up? Criminal mastermind Artemis Fowl has summoned an elite group of high-tech fairies to Iceland. He wants to present his invention to save the world from global warming. But something terrible has happened to him. Artemis Fowl has become nice. The fairies diagnose Atlantis Complex (aka multiple-personality d...

Twelve-year-old villain, Artemis Fowl, is the most ingenious criminal mastermind in history. His bold and daring plan is to hold a leprechaun to ransom. But he's taking on more than he bargained for when he kidnaps Captain Holly Short of the LEPrecon (Lower Elements Police Reconnaissance Unit). For a start, leprechaun technology is more advanced th...

IS THIS ARMAGEDDON FOR ARTEMIS FOWL? Opal Koboi, power-crazed pixie, is plotting to exterminate mankind and become fairy queen. If she succeeds, the spirits of long-dead fairy warriors will rise from the earth, inhabit the nearest available bodies and wreak mass destruction. But what happens if those nearest bodies include crows, or deer, or badger...

Ebo's sister left months ago. Now his brother has disappeared too, and Ebo knows that, to see them again, he must follow in their footsteps and make the hazardous voyage from Ghana to a safe haven in Europe. So the twelve-year-old sets off on an epic journey that takes him across the Sahara Desert to the dangerous streets of Tripoli and finally out...