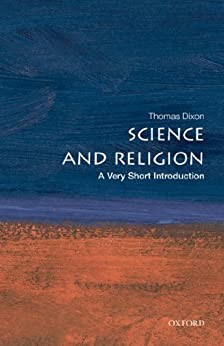 
The debate between science and religion is never out of the news: emotions run high, fuelled by polemical bestsellers like 'The God Delusion' and, at the other end of the spectrum, high-profile campaigns to teach 'Intelligent Design' in schools. Yet there is much more to the debate than the clash of these extremes. As Thomas Dixon shows in this balanced and thought-provoking introduction, many have seen harmony rather than conflict between faith and science. He explores not only the key philosophical questions that underlie the debate, but also the social, political and ethical contexts that have made 'science and religion' such a fraught and interesting topic in the modern world, offering perspectives from non-Christian religions and examples from across the physical, biological and social sciences. Along the way, he examines landmark historical episodes such as the trial of Galileo by the Inquisition in 1633, and the famous debate between 'Darwin's bulldog' Thomas Huxley and Bishop Wilberforce in Oxford in 1860. The Scopes 'Monkey Trial' in Tennessee in 1925 and the Dover Area School Board case of 2005 are explained with reference to the interaction between religion, law and education in modern America.

Author Sumbul Ali-Karamali offers her personal account, discussing the many and varied questions she fielded from curious friends and schoolmates while growing up in Southern California--from diet, to dress, to prayer and holidays and everything in between. She also provides an academically reliable introduction to Islam, addressing its inception,...

It is important for children living in the multi-faith society of today to grow up with an understanding of the rich diversity of religious beliefs and customs that co-exist within their communities. Here is a lively and informative companion to religious education studies for children of primary school age. The main religions - Hinduism, Buddhism,...

This Very Short Introduction introduces the reader to the teachings of the Buddha and to the integration of Buddhism into daily life. What are the distinctive features of Buddhism? Who was the Buddha, and what are his teachings? How has Buddhist thought developed over the centuries, and how can contemporary dilemmas be faced from a Buddhist perspec...

The Religions Book clearly explains the key concepts behind the earliest religious beliefs right up to the world's newest faiths, getting to the heart of what it means to believe with jargon-free descriptions, step-by-step diagrams, and witty illustrations that encapsulate every aspect of religious thinking. Examine major historical developments an...

History or myth? The word of God or the words of men? What is the Bible? This history, especially written for this recording, describes clearly and concisely how the Bible came into being, what it contains and its appearance in the ancient languages of Aramaic, Hebrew, Greek and Latin. After 400 years, the King James Version remains a religious tex...