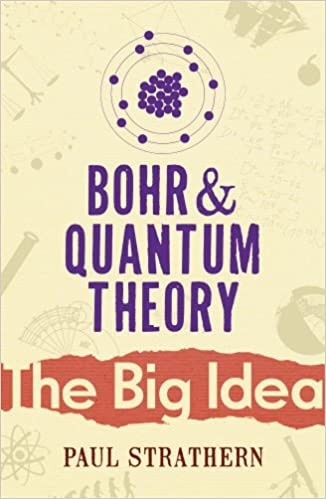 
At a moment of great discovery, one big idea can change the world... Niels Bohr's discoveries in quantum theory led to advances in physics and our understanding of atomic structure. His work won him the Nobel Prize in 1922 and his ideas continue to propel physics towards new discoveries. But what is quantum theory? Most of us do not understand even the basics of one of the most significant scientific advances ever made, opening up a whole new field in science, whose ambiguities still challenge scientists around the world. 'Bohr and Quantum Theory' offers an accessible and absorbing account of the man who was both a part of The Manhattan Project but also an advocate of peace. He held the key to understanding such intricate realities as black holes and nuclear energy. Bohr's 'Big Idea' explains complex and crucial ideas in a clear and engaging way, placing quantum theory in the context of a man's life, work and time and examining its important implications for our future.

'The Big Idea' is a fascinating series of popular science books aimed at scientists and non-specialists alike. Stephen Hawking's discoveries and research on black holes and cosmology have been hailed as the next leap for mankind into new worlds and a new era.

The Big Idea: Oppenheimer and the Bomb

The Big Idea: Oppenheimer and the Bomb

A charismatic teacher who inspired a generation of physicists, Robert Oppenheimer, the subject of this brief biography, is remembered today as 'the father of the atom bomb'. It was his creation that brought a devastating end to World War II. The two bombs dropped on Hiroshima and Nagasaki killed hundreds of thousands, destroyed the lives of million...

The Big Idea: Darwin and Evolution

The Big Idea: Darwin and Evolution

'The Big Idea' is a fascinating series of popular science books aimed at scientists and non-specialists alike. Charles Darwin's formulation of the theory of evolution with its now commonplace central idea of 'the survival of the fittest' is today generally accepted as logical and self-evident, yet at the time was seen as shocking and blasphemous.

The Big Idea: Pythagoras and His Theorem

The Big Idea: Pythagoras and His Theorem

Pythagoras was arguably the first mathematician and philosopher in the western world. This book presents a brilliant snapshot of his life and work and gives a clear and accessible explanation of their meaning and significance for the world we live in today.

The Big Idea: Curie and Radioactivity

The Big Idea: Curie and Radioactivity

'The Big Idea' is a fascinating series of popular science books aimed at scientists and non-specialists alike. Marie Curie's contribution to science won her two Nobel prizes. Her research into radioactivity and her work on radium furthered our understanding in nuclear physics and caused huge advances in the treatment of cancer.