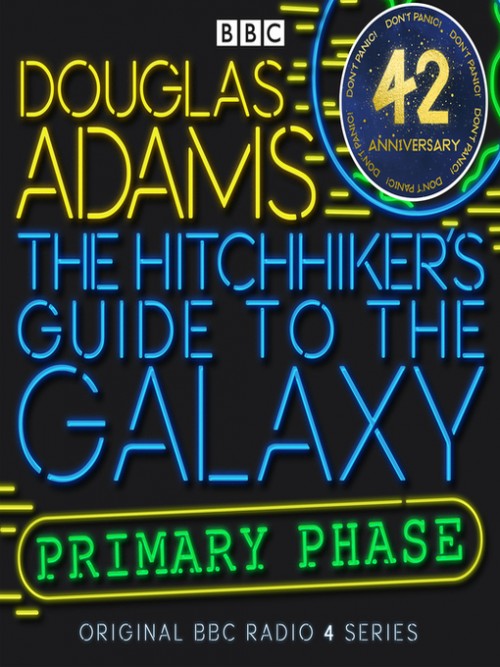 The Hitchhiker's Guide To the Galaxy: Primary Phase


Voted the nation's favourite audiobook in a recent Guardian poll, the original series of 'The Hitchhiker's Guide to the Galaxy' has been remastered by Dirk Maggs (director of the Tertiary, Quandary and Quintessential Phases) to give a full, vibrant sound, now with Philip Pope's version of the familiar theme tune and specially re-recorded announcements by John Marsh. Join Arthur Dent, Ford Prefect, Trillian, Zaphod Beeblebrox and Marvin the Paranoid Android in their first series of adventures as they witness the destruction of Earth to make way for a hyperspace bypass, stumble upon the ancient planet of Magrathea, dine at the Restaurant at the End of the Universe, and seek an answer to the Ultimate Question of Life, The Universe and Everything.

A Special Edition of the original radio series The Hitchhiker's Guide to the Galaxy, first broadcast on BBC Radio 4 in 1978. Starring Peter Jones, Simon Jones, Geoffrey McGivern, Mark Wing-Davey, Susan Sheridan and Stephen Moore, these six episodes (Fit the First to Fit the Sixth) have been remastered to modern-day standards by Dirk Maggs, and for...

It's the last ever installment of The Hitchhiker's Guide To The Galaxy, with a brand new full-cast dramatisation of Mostly Harmless, the final book in Douglas Adams's famous `trilogy in five parts'. While frequent flyer Arthur Dent searches the universe for his lost love, Ford Prefect discovers a disturbing blast from the past at The Hitchhiker's G...

Rescued from his beloved Macintosh, The Salmon of Doubt provides us with the opportunity to linger and frolic one last time in the uniquely entertaining and richly informative mind of Douglas Adams. For the millions of readers who expressed their grief and shock at his untimely death, this is a treasure; his final book and our last chance to see ne...