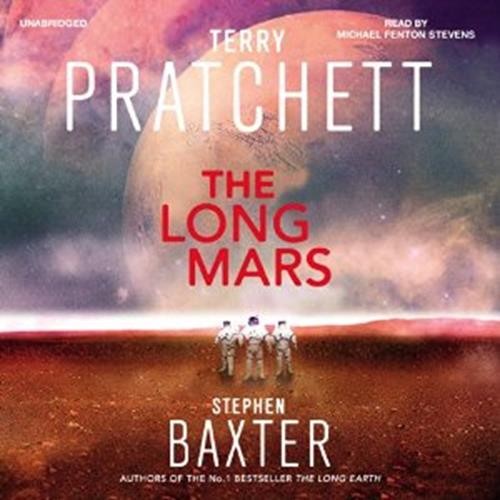 
2040-2045: In the years after the cataclysmic Yellowstone eruption there is massive economic dislocation as populations flee Datum Earth to myriad Long Earth worlds. Sally, Joshua, and Lobsang are all involved in this perilous work when, out of the blue, Sally is contacted by her long-vanished father and inventor of the original Stepper device, Willis Linsay. He tells her he is planning a fantastic voyage across the Long Mars and wants her to accompany him. But Sally soon learns that Willis has ulterior motives ...Meanwhile U. S. Navy Commander Maggie Kauffman has embarked on an incredible journey of her own, leading an expedition to the outer limits of the far Long Earth. For Joshua, the crisis he faces is much closer to home. He becomes embroiled in the plight of the Next: the super-bright post-humans who are beginning to emerge from their 'long childhood' in the community called Happy Landings, located deep in the Long Earth. Ignorance and fear are causing 'normal' human society to turn against the Next - and a dramatic showdown seems inevitable . . .

Eric is the Discworld's only demonology hacker. Pity he's not very good at it. All he wants is his three wishes granted.Nothing fancy - to be immortal, rule the world, have the most beautiful woman in the world fall madly in love with him, the usual stuff. But instead of a tractable demon, he calls up Rincewind, probably the most incompetent wizard...

'A foot on the neck is nine points of the law' There are many who say that the art of diplomacy is an intricate and complex dance between two informed partners, determined by an elaborate set of elegant and unwritten rules. There are others who maintain that it's merely a matter of who carries the biggest stick. Like when a large, heavily fortified...

All this books and stuff, that isn't what it should all be about. What we need is real wizardry. All is not well within the Unseen University. The endemic politics of the place have ensured that it has finally got what it wished for: the most powerful wizard on the disc. Which could mean that the death of all wizardry is at hand. And the world is...

'I thought: opera, how hard can it be? Songs. Pretty girls dancing. Nice scenery. Lots of people handing over cash. Got to be better than the cut-throat world of yoghurt, I thought. Now everwhere I go there's...' Death, to be precise. And plenty of it. In unpleasant variations. This isn't real life. This isn't even cheesemongering. It's opera. Whe...

'Things have to come to an end, see. That's how it works when you turn the world into stories. You should never have done that. You shouldn't treat people like they was characters, like they was things. But if you do, then you've got to know where the story ends.' That's the problem when you let real life get in the way of a good story. You should...

Football has come to the ancient city of Ankh-Morpork. And now, the wizards of Unseen University must win a football match, without using magic, so they're in the mood for trying everything else. This is not going to be a gentleman's game. The prospect of the Big Match draws in a street urchin with a wonderful talent for kicking a tin can, a maker...

2045-2059. After the cataclysmic upheavals of Step Day and the Yellowstone eruption humanity is spreading further into the Long Earth, and society, on a battered Datum Earth and beyond, continues to evolve. Now an elderly and cantankerous AI, Lobsang lives in disguise with Agnes in an exotic, far-distant world. He's convinced they're leading a norm...

They say that a little knowledge is a dangerous thing, but it is not one half so bad as a lot of ignorance. There are some situations where the correct response is to display the sort of ignorance which happily and wilfully flies in the face of the facts. In this case, the birth of a baby girl, born a wizard - by mistake. Everybody knows that there...

Time is a resource. Everyone knows it has to be managed. You mess with it at your peril. You can let it move fast or slowly but what you mustn't do is allow it to stop. On the Discworld time management is the job of the Monks of History, who store it and pump it from the places where it's wasted (like the underwater - how much time does a codfish n...