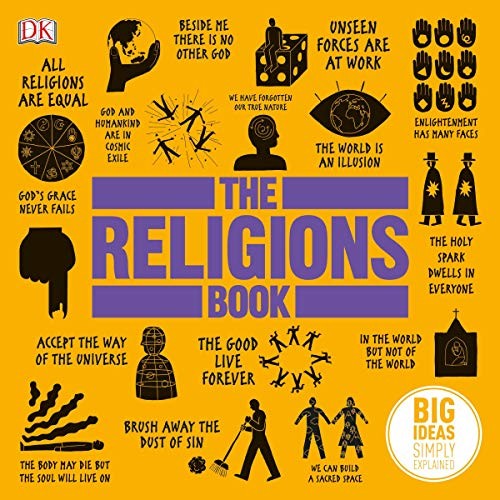 
The Religions Book clearly explains the key concepts behind the earliest religious beliefs right up to the world's newest faiths, getting to the heart of what it means to believe with jargon-free descriptions, step-by-step diagrams, and witty illustrations that encapsulate every aspect of religious thinking. Examine major historical developments and ideas with a universal timeline, providing a global perspective on the origins and major events that have contributed to the growth and spread of religion and spirituality. Along with the teaching highlights of pre-eminent figures such as Mahatma Gandhi, Saint Paul, and Al-Ghazali, you'll also find a handy reference section featuring a glossary of religious terms and a roadmap to all the branches of the major faiths and the points of doctrine or tradition on which they differ. Modern alternative religions and spiritual beliefs from around the world are also explored and set into the context of the political, social, and cultural climates from which they emerged.

The debate between science and religion is never out of the news: emotions run high, fuelled by polemical bestsellers like 'The God Delusion' and, at the other end of the spectrum, high-profile campaigns to teach 'Intelligent Design' in schools. Yet there is much more to the debate than the clash of these extremes. As Thomas Dixon shows in this b...

History or myth? The word of God or the words of men? What is the Bible? This history, especially written for this recording, describes clearly and concisely how the Bible came into being, what it contains and its appearance in the ancient languages of Aramaic, Hebrew, Greek and Latin. After 400 years, the King James Version remains a religious tex...

It is important for children living in the multi-faith society of today to grow up with an understanding of the rich diversity of religious beliefs and customs that co-exist within their communities. Here is a lively and informative companion to religious education studies for children of primary school age. The main religions - Hinduism, Buddhism,...

Is discretion the better part of valour, or does conscience make cowards of us all? Are these our salad days, or is this the winter of our discontent? Exploring the entire works of William Shakespeare, this book brings the language, themes, plots and characters of his plays and sonnets to life. Written in plain English, The Shakespeare Book is the...

Author Sumbul Ali-Karamali offers her personal account, discussing the many and varied questions she fielded from curious friends and schoolmates while growing up in Southern California--from diet, to dress, to prayer and holidays and everything in between. She also provides an academically reliable introduction to Islam, addressing its inception,...