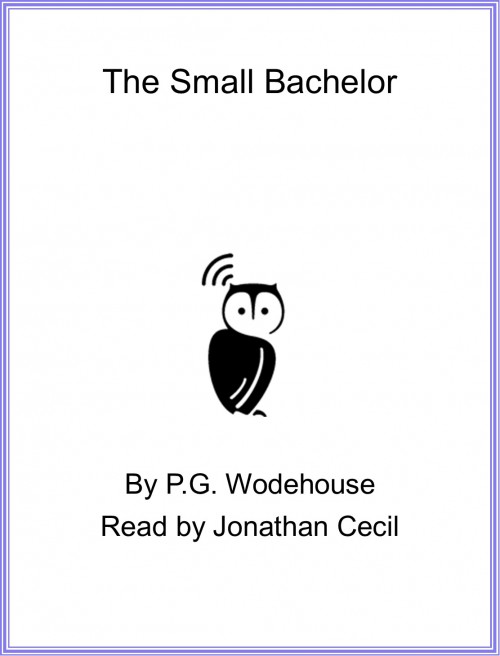 
It's America during Prohibition and shy young George Finch is setting out as an artist - without the encumbrance of a shred of talent. George falls in love with Molly, whose imperious stepmother, Mrs Waddington, insists he's not the man to marry the stepdaughter of one of New York's most fashionable hostesses. Poor George - he doesn't seem to stand a chance. How George eventually triumphs over the bossy Mrs Waddington makes for a dizzying plot featuring some of Wodehouse's most appealing minor characters - Mullett the butler and his light-fingered girlfriend Fanny, J. Hamilton Beamish, author of the dynamic Beamish Booklets, Officer Garroway the poetic policeman, and Sigsbee H. Waddington, the hen-pecked husband who longs for the wide open spaces of the West. Oh, and does Prohibition mean there's no booze? Watch this space.

Nothing in this world ever seems to be absolutely perfect, and that is certainly the case in this story. Young Billy, in love with a young and beautiful woman, attempts to woo her by making plans to rescue someone with his trusted group of friends. However, the scheme doesn't quite go according to plan, and the consequences are not necessarily as d...

The first volume of Wodehouse's brilliant complete and unabridged short stories. Originally a semi-novel, this version contains self-contained stories which are nonetheless linked, often by Bingo Little, an endearingly hopeless chap and a serial romancer: 1. Jeeves Exerts the Old Cerebellum 2. No Wedding Bells For Bingo 3. Aunt Agatha Speaks Her Mi...

Jeeves and the Hard-boiled Egg

Jeeves and the Hard-boiled Egg

A comical romp of an adventure involving Jeeves, Wooster and 'Bicky', whose uncle, the Duke of Chiswick, has the potential to be a wealthy benefactor to his nephew. Unfortunately, the Duke is what's known in the right circles as a 'hard-boiled egg' - ie 'notoriously the most prudent spender in England'. When Bicky contacts Bertie, our jaunt begins,...

A short story first published in the United States in The Saturday Evening Post on November 28, 1916, and in the United Kingdom in the April 1923 edition of Strand Magazine. Its first book publication. From 'Carry on, Jeeves'. Uncle Willoughby guest-stars in this story of engagement, surprise and of course, a whole lot of raucous comedy.

A typically shambolic and hilarious romp from the inimitable Jeeves and Wooster, who find themselves embroiled in college initiation rites in this story of students, aunts and three rather irate cats. Throw into the heady mix of comedic fancy a luncheon appointment with Sir Roderick, and the scene is set for a farcical showdown of epic proportions....

The Code of the Woosters: Abridged

The Code of the Woosters: Abridged

The sinister affair of the eighteenth century cow-creamer and the small, brown, leather-covered notebook tests the Wooster soul as it has never been tested before. Friends and relations, in urgent need, queue up to beg for assistance in a variety of troublesome situations, and ruthless enemies stop at nothing in their determination to bring Bertie...

Jeeves and Wooster: My Man Jeeves

Jeeves and Wooster: My Man Jeeves

A humorist praised by humorists, P. G. Wodehouse here introduces two of his most beloved characters. My Man Jeeves, first published in 1919, introduced the world to affable, indolent Bertie Wooster and his precise, capable valet, Jeeves. Some of the finest examples of humorous writing found in English literature are woven around the relationship be...

Hapless and often hopeless romantic Bingo Little has fallen for yet another young lady in this Jeeves and Wooster story of terrible cravats, far-from-fine dining and love's perhaps-not-so-young dream. Bertie is rather confounded by Bingo's love for a girl below his rightful station, so long-suffering Jeeves is roped in to talk to Bingo's uncle, who...

Jeeves and the Unbidden Guest: Jeeves

Jeeves and the Unbidden Guest: Jeeves

Bertie is feeling really rather spiffing, when he receives a surprise visit from the writer Lady Malvern and her son Wilmot. A friend of Bertie's Aunt Agatha, Lady Malvern requests that Wilmot stay with Bertie for a couple of weeks whilst she is away in America. Whilst not perfectly happy with the idea, Bertie agrees, to find that the seemingly mil...