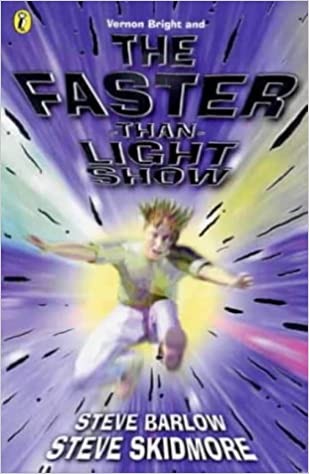 
This third Vernon Bright title centres around the science of light. Vernon, banned from lighting the school play when he blows up the school orchestra, is allowed to video the performance. For Vernon this involves adapting the latest hi-tech video recorder - but now he finds he can video the future. For Dodgy Dave this is a chance to win the lottery, but all goes wrong as Vernon films the past instead. Then, to Vernon's horror, he finds a film of his own death! He's in despair, until he has to take the part of the corpse in the school play - and his shouts of joy at being alive ruin another school production.

It started with a banana ... now Vernon Bright has managed to turn himself into a living magnet. He's being attacked by shopping trolleys and he sends computers haywire. It's up to John Watt to find a solution. And hitting him over the head isn't going to work...

When Watts finds Frankenstein's notebook, he lends it to Vernon Bright, his science-mad friend. When Watts takes the school hamster home, an accident leaves Mr Nibbles lifeless. Watts realises too late that Bright plans to bring the hamster back to life by using Frankenstein's knowledge.