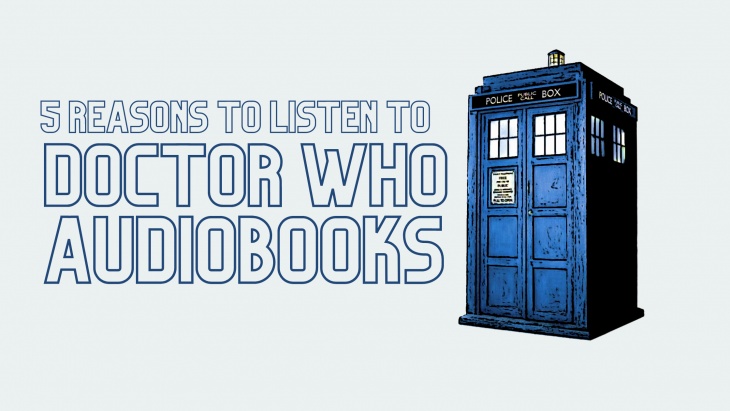 5 Reasons You Should Listen to Doctor Who Audiobooks

We all miss Doctor Who while they're filming a new series. But there's a great way to get more of the show in your life while you wait!

If you're a die-hard Doctor Who fan then there's a chance that you've already listened to many of the Doctor Who audiobooks already. You might even have a preferred listening order (we know you're out there!). But for many of us, they're a brand new way to experience one of the most beloved and longest running TV shows on the BBC. If you haven't yet discovered them then here are 5 great reasons you should try listening to one!

If you've ever listened to an audiobiography you'll know they're often more engaging when they're read by the author. The same is definitely true when Doctor Who audiobooks are read by the actors from the TV show. Thankfully, there are so many to choose from - narrators include David Tennant, Matt Smith, Arthur Darvill, Catherine Tate, Freema Agyeman...There are literally too many more to mention! Even Nicholas Briggs, the voice behind the notorious Dalek catchphrase 'EXTERMINATE!', narrates some of the audiobooks! All you have to do is find your favourite and you can listen to them telling you a Doctor Who story.

What do many of the episodes of Doctor Who that are consistently ranked the scariest have in common? There's Blink, where we first meet the Weeping Angels, and Listen, featuring the monster under the bed. And then there's my favourite: Midnight, where we never really know what's going on to be honest! All these episodes get their scares from not showing you everything so your imagination can run wild. That's the freedom that listening to an audiobook gives you - the author transports you to the scariest of situations and then it's up to your imagination to do the rest! Prepare yourself by grabbing a cushion to hide bheind and turning on all the lights, so when you put on your headphones you'll be ready to be spooked!

From the otherworldly buzz of the sonic screwdriver to the iconic VWORP of the TARDIS, there are some sounds that the show could not be without. And the best part of an audiobook is that they can be included! While the text is often read by one narrator, the legendary theme music often starts the story. In the Dead Air audiobook, which features the tenth Doctor, some very clever sound design produces the effect of a restored audio tape from 1966. If you're worried that listening to an audiobook won't feel as immersive as watching the TV show, the sound effects are a great way that the audiobooks bridge that gap and propel you right into the centre of the story!

It's not just all-star narrators that lend their talents to Doctor Who audiobooks. If you enjoyed The Power by Naomi Alderman then you should know that she also wrote a Doctor Who novel called Borrowed Time. Or how about Neil Gaiman, bestselling sci-fi and fantasy author and writer of the Doctor Who episode The Doctor's Wife? He is just one of twelve contributors to a collection of Doctor Who short stories called 12 Doctors, 12 Stories, as well as authors like Malorie Blackman, Patrick Ness and Eoin Colfer! But it isn't just blockbuster names writing Doctor Who audiobooks. Many authors have been writing stories featuring the Doctor for years, so they know the lore and the characters back to front.

Even though one of the main features of the show is that the Doctor and their companions change regularly, sometimes it's nice to re-visit our favourites now and again. Whether you want more stories featuring Martha, or even if you're keen to get back to the time of the Fifth Doctor, there's a story for you. Plus, you can delve deeply into everything you've ever wanted to know about the Daleks but were too afraid to ask in audiobooks like The Dalek Conquests, or relive a classic Who episode in an official novelisations like Doctor Who and the Prisoners of Mars. And, honestly, who doesn't want more Doctor Who in their life?

Inspired to listen to some Doctor Who audiobooks? You can choose from hundreds to borrow from the Listening Books library! Just click here to start searching!

If you have an illness, disability, learning difficulty or mental health issue that makes reading print or holding a book difficult, Listening Books can help. We are a UK charity providing an audiobook library for anyone with a print impairment. Membership starts from just £20 per year to listen to 10 books a week! Find out more at our website.

4am. Peterborough Railway Station is deserted. Lisa is determined to discover why the man walks to the platform edge. After all, she was the first of the two to die. ⁠
Platform Seven is the new novel by @louisedoughtyauthor and the audiobook is available to borrow from our library now - find the link in our bio! @faberbooks⁠
⁠
⁠
#louisedoughty #platformseven #faberandfaber #audiobook #audiobooks #audiobookstagram #crimebooks #igreads #library #uklibrary #ukcharity #bookcharity #charitiesofinstagram #listeningbooks