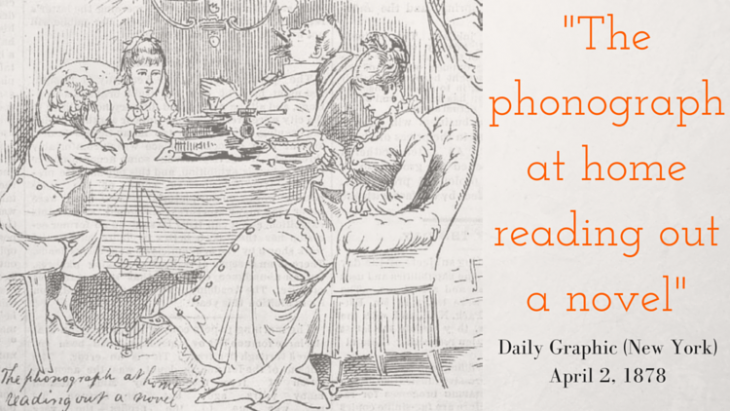 Timeline: The History of the Audiobook

The image above, drawn a year after the invention of the phonograph, envisioned a future of whole families sitting down around the player listening to its delights. The audiobook has come a long way since then, from only being able to store four minutes at a time on a cylinder, to a wealth of digital audiobook downloads at our fingertips.

The listenership has also changed dramatically. Originally, audiobooks, or 'talking books' as they were called, were only available for the blind; today the industry is in stage of massive growth as the time-poor population consume audiobooks in their masses while commuting, cleaning, or at the gym.

This timeline gives you landmarks of audiobooks, so you can see how this impressive medium has developed.

Thomas Edison invented the phonograph. This made spoken word recording possible for the first time.

Edison envisioned that “phonograph books” would be able to speak to blind people.

The first recorded verse was Edison reciting Mary Had a Little Lamb. [1]

A demonstration at the Royal Institution included a recording of Hey Diddle Diddle.

Recordings were mainly of poetry and verse. Books were impractical as the cylinders were limited to about four minutes each.

These short spoken-word recordings were sold on cylinder in the late 1800s and early 1900s. Soon after, flat platters increased the recorded length to twelve minutes, but this was generally still too short for a book. One early user commented that he “would need a wheelbarrow to carry around talking books recorded on discs with such limited storage capacity”. [2]

The term ‘talking book’ was coined, and was designed to cater for blind readers. [3]

The first talking books went out by post to blind readers in America in October.

They included The Bible, patriotic documents like the Declaration of Independence, and, of course, Shakespeare. There was fiction, too, including Rudyard Kipling’s The Brushwood Boy, E. M. Delafield’s The Diary of a Provincial Lady, and P. G. Wodehouse’s Very Good, Jeeves.[4]

Britain’s first talking books were sent out to the blind, beginning with Agatha Christie’s The Murder of Roger Ackroyd and Joseph Conrad’s Typhoon. [5]

The first audiobooks became available to the wider public - two decades after the first talking books were released to blind readers.

In 1959, The National Listening Library (now Listening Books) was created by Norma Skemp to provide for partially sighted individuals who had previously been excluded from receiving audiobooks from charities for the blind.

A new ‘talking book player’ - which played tapes - was introduced in the UK and spoken word started to be distributed on tape. [8]

The magnetic tape had to be loaded and threaded manually - which was not easy for the blind! These were sturdier than records but so heavy that the postman had to deliver them separately.

A light and compact cassette player was launched and audiocassettes started to be produced and distributed more widely.

Very quickly audiocassettes became the media of choice for talking books, and remained that way until the invention of the compact disc at the beginning of the 80s. Public libraries in both USA and UK started filling their shelves with talking books, as publishers started releasing the spoken word versions of their books alongside the hardback edition.[9]

Mail-order vendors began selling or renting out audiobook cassette tapes to the growing number of commuters who listened to them while driving.[10]

The compact disc (CD) was launched.

Audiobooks on compact disc became more and more popular as the 90s rolled on, with tens of thousands of recordings - nearly every bestseller written has been recorded. Unabridged books would still take many CDs, hence most recorded books were abridged.[11]

Founder Don Katz had always loved audiobooks, and Audible began when he ran in to an old computer scientist friend who was experimenting with data compression and flash memory, which had just been invented.

The handheld device, advertised as “smaller and lighter than a Walkman”, included just four megabytes of memory, enough for two hours of speech (it would refresh overnight to have the next part of the book ready).[13]

The final year that cassettes represented greater than 50% of total market sales. [14]

The CD was about to take over.

CDs reached a peak of 78% of audiobook sales.

The consumption of audiobook CDs then began to decline in favour of digital downloads. The same year, Audible was sold to Amazon.[15]

There was a surge in audiobook listeners and consumption.

Sales of digital downloads soared in these years, pushed in part by the huge smartphone market. At the same time, publishers started investing six-figure sums in splashy productions with famous, and sometimes multiple, narrators.[16]

Approximately 3.88 million audiobooks were downloaded in 2015 compared to the 2.47 million eBooks that were read, and 20 publishers said that audiobooks were now the book subscription model of choice.[17]

What will 2016 and onward hold for the audiobook? We'd love to hear your predictions!

And if you'd like to know more about the history of audiobook, this website is a great resource, run by audiobook historian Matt Rubery.