Listening Books is a national audiobook charity providing an online and postal audiobook service for the print impaired.

The charity was founded in 1959 by Norma Skemp, after a serious car accident in 1954 caused her to virtually lose her sight. When she applied to another charity for help, she found that they could not help her because she could still ‘see something’. Norma immediately recognised a gap in provision for people with disabilities and she set up Listening Books. Since then the charity has grown and now supplies audiobooks to people with the full range of print impairments.

Since 2002, we have pioneered an educational initiative called Sound Learning. Its aim is to make educational books available in audio formats, thereby improving access to the curriculum for pupils with a physical or leaning disability, long term condition, or mental illness which affects how they read or hold a book.

Today, Listening Books is at the forefront of audiobook technology. We launched our internet streaming service in 2005, shortly followed by an MP3 CD service in 2007. Then in early 2010 we introduced audiobook downloads in partnership with OverDrive. This has continued to give our members enormous quality, convenience and choice, and with the addition of access to Pressreader in 2021 and all the magazines and newspapers in audio format available, members now have more choice than ever.

Follow this link to listen to an audio tribute to Norma Skemp, which was written by our chairman, Gillian Howarth, in 2003. 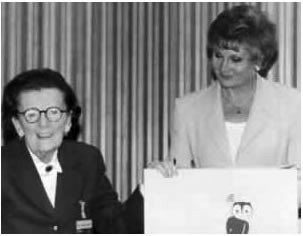