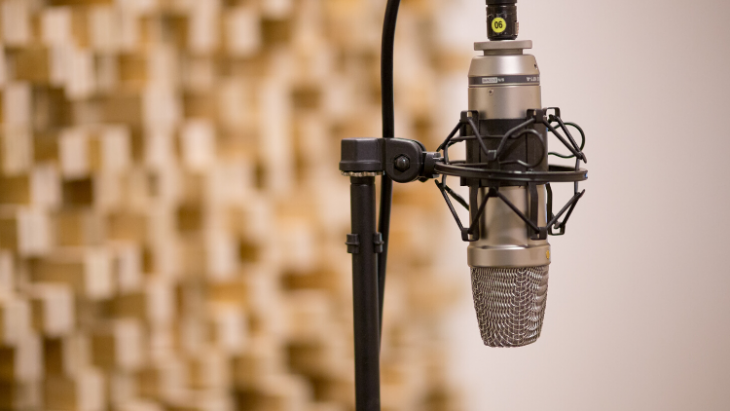 When it comes to choosing audiobooks, you can't go wrong with one narrated by multiple narrators! Especially when a book is written from more than one perspective, having multiple narrators helps with immersing yourself in the characters heads. This works particularly well for crime novels, for short stories, and for adapting books that rely on illustrations. But, everything from two character voices to a full cast can help to enhance the story!

Here are some of our favourite choices for audiobooks with multiple narrators:

Despite being published in 2019, Daisy Jones and the Six has already been snapped up by Reese Witherspoon's production company. It's an addictive story, written as a combination of interviews, but the best way to experience it as an audiobook. Over thirteen narrators voice each character so they are all distinctive. Combined with the oral history style of the writing, listening to this audiobook feels like a documentary. By the end, you may even with that the meteoric rise and fall of a fictional 1970s band was real!

Borrow Daisy Jones and the Six from our library

Jim Broadbent and Helen Johns split the narration of He Said/She Said, which helps bring this audiobook to life. The story hinges on an attack that takes place during a solar eclipse, so that neither Laura nor her boyfriend, Kit, see the whole picture. Having two narrators is perfect for relating to each characters perspective so that you're guessing the whole way through. What really happened? You'll have to read to the end of this audiobook to find out!

Borrow He Said/She Said from our library

The idea for The Lost Words was originally sparked after a children's dictionary removed words like acorn, kingfisher, and wren. These words simply weren't being used enough to justify needing definitions anymore. However, the authors wanted to make sure that children would know these words, so they came up with what they call a 'book of spells'. It is quite a short book, full of poems and illustrations, but this makes it a perfect audiobook for multiple narrators. Edith Bowman and Benjamin Zephaniah, as well as several others, lend their voices to each poem, while their words are interpersed with natural soundscapes and bird calls. This makes listening to the audiobook a wonderfully immersive experience, almost like taking a walk outside. It may only be short, but it's absolutely worth it.

Borrow The Lost Words from our library

Zadie Smith's first novel was a sensation when it was first published in 2000 and remains a stunning read. It follows two wartime friends - Archie Jones and Samad Iqbal - and the families around them. Narrators such as Lenny Henry and Ray Panthaki bring the tensions between immigrants and native-born Britons living in contemporary London to life. A truly impressive audio experience.

Borrow White Teeth from our library

Good Night Stories for Rebel Girls introduces young women to over one hundred inspirational women, including Ada Lovelace, Malala, and Serena Williams. Plus, a wide cast narrates these stories, from Samira Wiley to Alicia Keys to Philippa Soo. This is a collection for ambitious heroines, and the narrators will help you keep track of the different stories.

Borrow Good Night Stories for Rebel Girls from our library

Me Before You - Jojo Moyes

This romantic and poignant love story is the first in a series by Jojo Moyes. The story follows two people who have very little in common, but they burst into each others lives and change them forever. One main narrator and full cast of supporting voices help to create the world. But just make sure you have some tissues near you while listening to this audiobook as you'll almost definitely cry!

Borrow Me Before You from our library

This hard-hitting collection of essays looks at the realities of being an immigrant in contemporary UK. 21 contributors write about issues such as constantly being considered a potential threat, feeling that you must always be an ambassador for your race, and always feeling that you are 'other'. Also, each contributor narrates their own essay, which makes the audiobook a truly personal experience. It gives a voice to people who are usually unheard in British culture which means that this is an essential listen.

Borrow The Good Immigrant from our library

The Art of Being Normal - Lisa Williamson

The Art of Being Normal follows David Piper, a transgender girl still living as a boy, and Leo Denton, who only has one goal: to be invisible. Their unlikely friendship changes both their lives. This is a young adult story about two teenage boys trying to navigate their lives, and it is narrated by trans actors. That choice gives the story a realism that makes the characters feel real and the story much more immersive.

Borrow The Art of Being Normal from our library

Roald Dahl may be most famous for his children's books, but he also wrote many short stories. Madness collects some of his darkest stories about losing control of sanity. On top of that, some big names read these macabre tales, including Andrew Scott, Adrian Scarborough, and Tamsin Grieg. If you're looking for short stories then you can't go wrong with this audiobook!

Borrow Madness from our library

Illegal is the story of Ebo, who makes the long and dangerous journey from Ghana to Europe as a refugee. A full ensemble cast bridges the gap between the print picture book and the audiobook. Along with music and sound effects, this brings the audiobook totally to life. This is a short audiobook but it is still heartwrenching.

Borrow Illegal from our library

There There - Tommy Orange

An ensemble cast is the most effective way to make this book about contemporary Native Americans powerful. There are twelve different perspectives, and the narrators make each one distinct. Individual stories slowly unfold and intertwine with each other that really brings to life this novel about family, violence, identity, and power.

Borrow There There from our library

What audiobooks with multiple narrators do you enjoy? Let us know in the comments!

If you enjoyed this post, you may also enjoy: 23 Celebrity Autobiographies Read by the Author and An Interview with an Audiobook Narrator.

Esmé Weijun Wang was officially diagnosed with schizoaffective disorder in 2013, although the hallucinations and psychotic episodes had started years before that. Written with immediacy and unflinching honesty, this visceral and moving book is Wang's story, as she steps both inside and outside of her condition to bring it to light.

Following her own diagnosis and the many manifestations of schizophrenia in her life, she ranges over everything from how we label mental illness to her own use of fashion and make-up to present herself as high-functioning, from the failures of the higher education system to how factors such as PTSD and Lyme disease compounded her experiences.

Wang's analytical, intelligent eye, honed as a former lab researcher at Stanford, allows her to balance research with haunting personal narrative. The Collected Schizophrenias, narrated by the author, cuts right to the core and provides unique insight into a condition long misdiagnosed and much misunderstood.