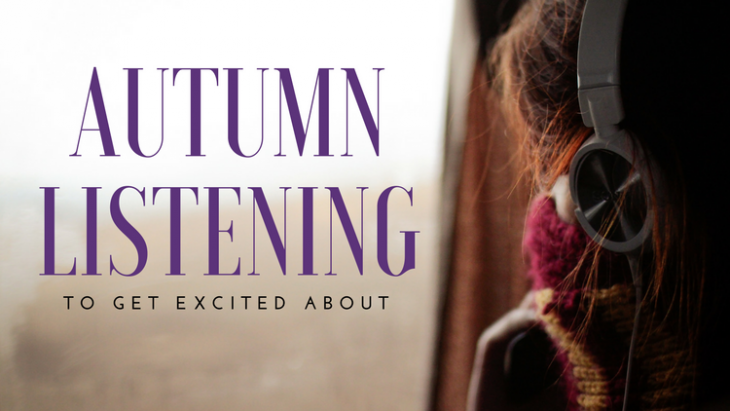 Autumn Listening to Get Excited About

The summer holidays might be over, but that doesn't mean you can't find the time to relax with an audiobook!

We've got some brilliant new titles that we'll be adding to the library over the next few weeks. Here's a selection of the autumn listening we've got in store...

The Strange Disappearance of the Bollywood Star - Vaseem Khan

The first two books in the Baby Ganesh Agency Series has been very popular with both our staff and members, so we can't wait to get our hands on the third instalment! Inspector Chopra and his sidekick, the baby elephant Ganesha, explore the world's most flamboyant movie industry as they investigate the disappearance of a rising Bollywood star.

We chatted to Vaseem Khan earlier in the year about the Baby Ganesh series. If you can't wait for the next book in the series you can fill the time by listening to the interview!

Jodi Picoult's latest novel is a New York Times and Sunday Times bestseller. It concerns the consequences of the death of a newborn baby following a routine hospital procedure and focuses on the powerful themes of birth, death, prejudice and power. With a film adaptation starring Viola Davies and Julia Roberts already in development, this is the perfect audiobook to get your autumn listening started!

If you loved last year's psychological thriller The Missing, be sure to check out C. L. Taylor's sixth and latest novel, The Escape. In this gripping story, Jo Blackmore agrees to give a stranger a lift and quickly regrets her decision. Jo discovers that somehow the stranger knows both her and her husband, and has a glove belonging to her two-year-old daughter. What begins as a subtle threat quickly escalates into a nightmare.

If, like us, you can't wait to see comedian Susan Calman strut her stuff on the latest series of Strictly Come Dancing, you can find out a bit more about her by listening to her hilarious and heart-breaking memoir. A detailed account of her battle with depression, Susan discusses how she embraced her dark side and realised that she can be the most joyous sad person you'll ever meet.

International bestselling author Wilbur Smith returns to Egypt in his latest novel. After the death of Pharaoh Tamose, a new and cruel Pharaoh, Utteric has risen to power. Utteric's younger brother Rameses is torn between loyalty to his friends and duty to his family. He knows that Utteric must be stopped so Egypt can be reclaimed.

And we'll be adding plenty of new titles for children and young adults too. Which ones? I'm so glad you asked! Here are just a few of our favourite additions to our autumn listening that will be popping up in our catalogue very soon...

Comedian and number one children's author David Walliams bring you two collections of ten hilariously horrible stories! Get ready to be grossed out as you listen to stories about the rudest, naughtiest, most disgusting children in the world!

If you loved the Divergent series, you should definitely check out this first instalment of Roth's new science-fiction series. Cyra is the sister of the brutal tyrant who rules the Shotet people. Akos is from the peace-loving nation of Thuvhe, and his loyalty to his family knows no bounds. When Akos is thrust into Cyra's world, the animosity between their countries and families seems insurmountable. Will they help each other to survive, or will they destroy one another?

A charming and poignant story by one of our best-loved children's authors and read by actor Ian McKellen! High in the mountains in a tiny village, an abandoned bear cub is adopted by a lonely orphan child. Soon they are inseperable and the bear is safe, until the arrival of a glamorous film crew who need a dancing bear...

Head over Heels and Forever Geek are the final two books in Holly Smale's hilarious Geek Girl series. They continue to follow Harriet Manners, a smart, fact-spouting teenager who also happens to be a jet-setting model.

The second and third instalments by Derek Landy, author of the hugely popular Skulduggery Pleasant series. In Desolation, Amber and Milo flee north after their bloody encounter at the end of the Demon Road. Their only hope lies in Desolation Hill, a small town with a big secret. American Monsters is the epic conclusion of the trilogy and sees Amber closing in on her murderous parents as they make one last play for power. Can't wait? Listen to the first book in the series!

We hope you're as excited as we are about these new autumn listening titles! We'll be adding them to the catalogue soon, so keep your eyes peeled! Leave a comment and let us know which one you're most excited about!

Looking for something to listen to while you wait? Try some more of our Audiobook Recommendations!