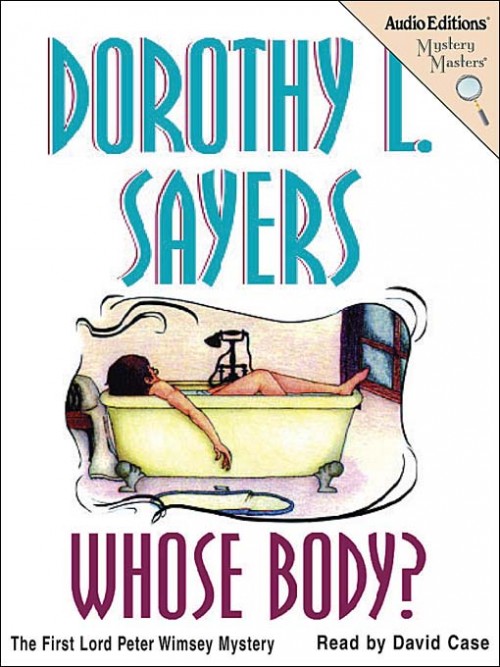 
Ian Carmichael is Lord Peter Wimsey, with Patricia Routledge as his mother, in this BBC radio 4 full-cast dramatisation. Dorothy L. Sayers' first Lord Peter Wimsey tale introduces many of the author's best-known characters. Wimsey's mother, the Dowager Duchess of Denver, rings her son with news of 'such a quaint thing'. She has heard through a friend that Mr Thipps, a respectable Battersea architect, found a dead man in his bath - wearing nothing but a gold prince-nez. Lord Wimsey makes his way straight over to Mr Thipps, and a good look at the body raises a number of interesting questions. Why would such an apparantly well-groomed man have filthy black toenails, flea bites and the scent of carbolic soap lingering on his corpse? Then comes the disappearance of oil millionaire Sir Reuben Levy, last seen on the Battersea Park Road. With his beard shaved he would look very similar to the man found in the bath but is Sir Levy really dead?

Enter the 1920s' Golden Age of Detection with this first novel from Dorothy L. Sayers featuring the debut of a dashing gentleman detective, one of the great characters of mystery fiction - Lord Peter Wimsey. An unidentified corpse is found in a bathtub, and the police are jumping to conclusions about its identity and that of the murderer. Lord Pete...

A Miss Dimont Mystery Book 4: Died and Gone To Devon

A Miss Dimont Mystery Book 4: Died and Gone To Devon

In the seaside town of Temple Regis, seagulls are wheeling overhead and the holidays are getting close. And then the body of political candidate Odile Clifford is discovered on the balcony of the lighthouse. Fearless Riviera Express reporter Judy Dimont goes in search of the killer - but who is it? And where will they strike next? What's more, Judy...

Storm-bound over the New Year at a Fenland rectory, Lord Peter Wimsey willingly lends a hand in the ringing of a New Year's Eve peal of the church bells. Some months later, a handless, disfigured corpse is discovered in a fresh grave in the churchyard. Lord Peter receives a plea for help from the rector and embarks on one of his most complicated in...

Andrew Sachs stars as the famous clerical sleuth in this BBC Radio 4 full-cast dramatisation. With his black hat, huge umbrella, unwordly simplicity and 'beaming but breathless geniality', Father Brown is one of fiction's best-loved amateur detectives. Short and tatty, but with the wisdom and insight to unravel the most wayward of criminal minds, h...

Bill Nighy returns as Charles Paris: unsuccessful actor, bad husband and dipsomaniac. Desperately in need of work, having been kicked out of the marital home, Charles jumps at playing a missing property developer in a crime reconstruction programme. But the missing person case soon turns to murder when severed body parts begin to appear. Television...