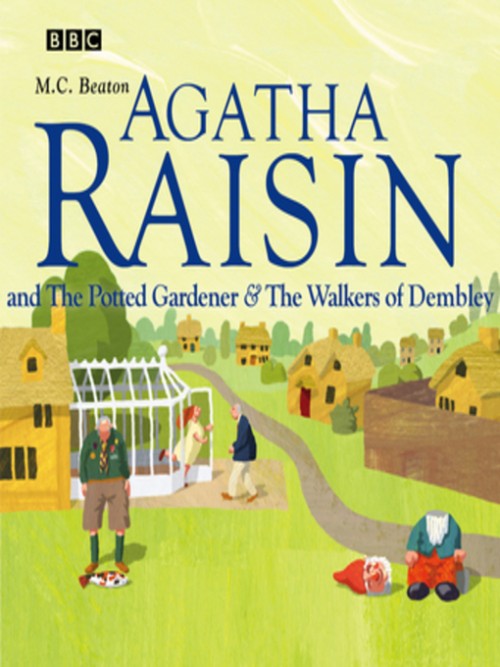 
Agatha Raisin, the Columbo of the Cotswolds, is back in four more full-cast dramas based on the bestselling books by M.C. Beaton. The Potted Gardener - When a garden festival is announced, the village of Carsely is gripped with enthusiasm for water features and mulch. But the Grim Reaper is in the garden... The Gardener's Legacy - When her arch rival at the garden festival is found hanging from her conservatory roof, Agatha is determined to dig deep and root out the wrongdoer. The Walkers of Dembley - Keen to get closer to James Lacey, Agatha joins his walking group. But she is soon embroiled in a saga of murder, lust and wellington boots. A Marriage of Convenience - Agatha and James are hired to investigate the murder of a militant rambler. They go undercover as a married couple, but it's a marriage made in hell.

THE TERRIBLE TOURIST: Now that their marriage plans have collapsed, Agatha is furious to find that James is taking a holiday on the island where they were to have their honeymoon. But when she sets out in pursuit of him, she stumbles upon another murder. THE FAIRIES OF FRYFAM: Having been hurt by James once too often, Agatha takes a trip to the Cor...

Agatha's away with the fairies... And the little folk are causing big trouble for her! Angry at being jilted by new husband James, Agatha follows a fortune-teller's advice and rents a cottage in pretty Fryfam. There, she hopes, true love will come chasing after her. But her romantic notions are dispelled by a series of odd goings-on in the village:...

'The Wizard of Evesham': Agatha is alarmed when her new wizard of a hairdresser seems keen to take on more than just her split ends. She soon discovers that everyone in his salon has a secret and that he practices a very dark magic indeed. 'The Moment of Truth': Agatha must quickly discover the identity of the prisoner, but James is refusing to hel...

The latest Agatha Raisin mystery from best-selling author M. C. Beaton. The team of bells at St. Ethelred church is the pride and glory of the idyllic Cotswolds village of Thirk Magna, together with the most dedicated bell ringers in the whole of England: the twins Mavis and Millicent Dupin. As the village gets ready for the Bishop's visit, the twi...

Agatha Raisin's detective agency has become so successful that she decides to take time off for rest and relaxation. But as soon as she does, she remembers that when she does have time on her hands, she doesn't know what to do with it. So it doesn't take much for the vicar of a nearby village to persuade her to help publicize the church fete - espe...

Almost bigamy and absolute murder - Agatha's life is never dull . . . The morning of Agatha's longed-for marriage to James Lacey dawns bright and clear. But her luck runs out in the church when Jimmy, the husband she had believed long dead, turns up large as life and twice as ugly. Agatha has a go at strangling him. It's all too much for James, who...

The Curious Curate & the Buried Treasure

The Curious Curate & the Buried Treasure

'The Curious Curate' - When the village curate is found murdered, retired PR guru Agatha Raisin vows to bring his killer to justice, particularly if the investigation also brings her closer to her handsome next-door neighbour, Colonel Lacey. 'The Buried Treasure' - When Agatha embarks on a plan to give up smoking, little does she know that it will...

A newcomer to the village, Mary Fortune, is discovered murdered. Agatha seizes the moment and immediately starts yanking up village secrets by their roots and digging the dirt on the victim. But the problem is, Agatha has an awkward secret of her own.

Agatha Raisin and the Love From Hell

Agatha Raisin and the Love From Hell

Love, like hell, is a four-letter word for Agatha. Recently married to neighbour James Lacey, Agatha quickly finds that love is not all it's cracked up to be - soon the newly-weds are living in separate cottages and accusing each other of infidelity. Then, after a fight at the local pub, James vanishes - a bloodstain the only clue to his fate. Natu...