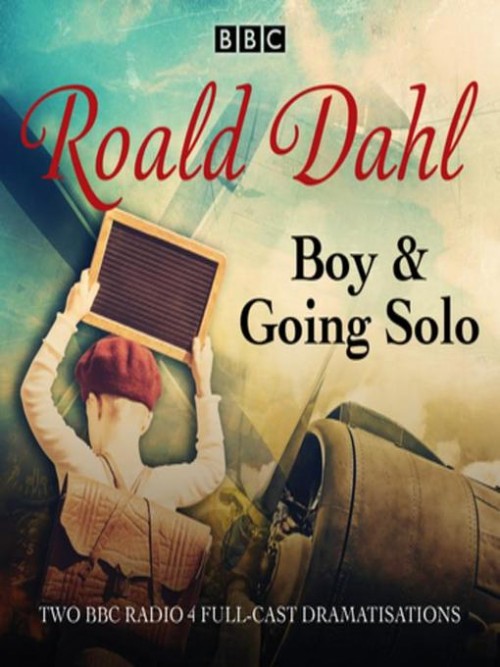 
Two new BBC Radio 4 full-cast dramatisations of Roald Dahl's gripping autobiographical stories. These two compelling adaptations, based on Roald Dahl's real-life tales of his of his boyhood and youthful overseas adventures, celebrate his remarkable life and commemorate his genius. Boy Dahl's childhood was one of excitement, wonder, terror and sadness. From his fascination with the local sweetshop to the Great Mouse Plot, the horrors of boarding school, the obnoxious Boazers and his time as a chocolate taster for Cadbury's, we hear of the extraordinary events that shaped him and inspired his bestselling books. Going Solo Setting sail for Africa on the SS Montola, aged 22, Dahl is plunged into an unfamiliar world of eccentric colonial characters. In Tanzania he enjoys life on the savannah, encountering lions and deadly mambas - but when World War II breaks out, and he must round up the Germans in Dar es Salaam, he experiences the brutality of war. As he leaves the bush behind and takes to the skies as an RAF pilot, many thrilling adventures and dangerous missions will ensue before he finally makes his way back home... Starring Patrick Malahide as the voice of Dahl, these colourful dramatisations will carry you away into worlds every bit as amazing, strange and memorable as the ones in his acclaimed fiction. Duration: 3 hours approx

The unabridged, downloadable audiobook edition of Only This, a short, gripping story of life in wartime from Roald Dahl, the master of the shocking tale. Read by the actress Sophie Okonedo. In Only This, Roald Dahl, one of the world's favourite authors, tells of a mother restlessly waiting for her bomber crewman son to return form a raid...

Penguin presents the audiobook edition of Galloping Foxley by Roald Dahl, read by Richard Griffiths. In Galloping Foxley, Roald Dahl tells a sinister story about the darker side of human nature. Here, a commuter is disturbed by an encounter with a man he vividly remembers from school . . . Galloping Foxley is taken from the short story collection S...

The unabridged, downloadable audiobook edition of Royal Jelly, a brilliant gem of a short story from Roald Dahl, the master of the sting in the tail. Read by Oliver-award-winning actor Adrian Scarborough. In Royal Jelly, Roald Dahl, one of the world's favourite authors, tells a sinister story about the darker side of human nature. Here, a husband a...

Penguin presents Revolting Rhymes by Roald Dahl, complete and unabridged and raucously read by Miriam Margolyes, Stephen Mangan, and Tamsin Greig. This audiobook also contains original music. You can think again if you thought you knew the stories of some of the most popular fairy tales. Here are six of the best known retold, with more than a twist...

The Way Up To Heaven

The Way Up To Heaven

The unabridged, downloadable audiobook edition of William and Mary, a brilliant gem of a short story from Roald Dahl, the master of the sting in the tail. Read by Juliet Stevenson and Adrian Scarborough. In William and Mary, Roald Dahl, one of the world's favourite authors, tells a sinister story about the darker side of human nature. Here, a wrong...

From Roald Dahl, the master of the sting in the tail, a newly collected audiobook of his darkest stories, read by Mark Heap, Derek Jacobi, Richard E Grant, Gillian Anderson, Shane Rimmer, Julian Rhind-Tutt and Jessica Hynes. We fall not in love but in lust . . . Lust, in all its myriad forms, consumes us. What won't we do to achieve our heart's des...

From Roald Dahl, the master of the sting in the tail, a newly collected audiobook of his darkest stories, read by Juliet Stevenson, Cillian Murphy, Adrian Scarborough, Tamsin Greig, Stephanie Beacham and Andrew Scott. 'There is a pleasure sure in being mad, which none but madmen know' Our greatest fear is of losing control - of our lives, but, most...

Little Billy doesn't really believe there are monsters in the wood, but the red-hot smoke-belching gruncher is real enough, and so are the tiny minpins, whose miniature world is in danger.

Penguin presents the audiobook edition of Katina by Roald Dahl, read by Cillian Murphy. In Katina, Roald Dahl tells of a young Greek girl fascinated by the British planes and airbase that have come to her village. Katina is taken from the short story collection Over to You, which includes nine other dramatic and terrifying tales of life as a wartim...