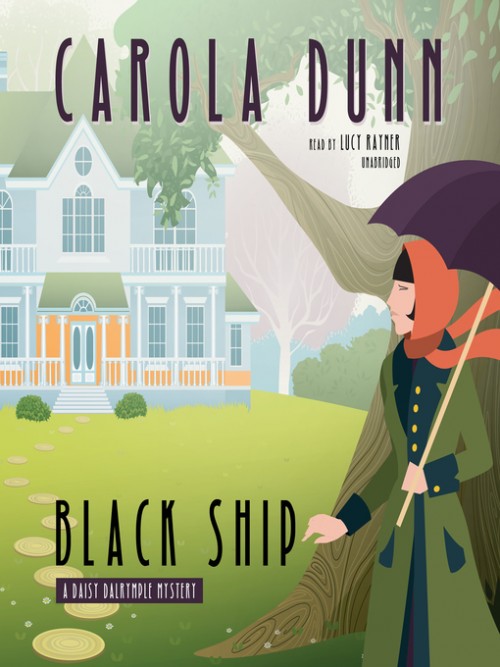 
In September 1925, Scotland Yard DCI Alec Fletcher inherits a large house on the outskirts of London, from a recently deceased great-uncle. Fortunately so, as he and his wife, the Honourable Daisy Dalrymple Fletcher, are the recent proud parents of twins and their house is practically bursting at the seams. Though in need of a bit of work, this new, larger house seems a godsend-set in a small circle of houses, with a communal garden and Hampstead Heath nearby, the setting is idyllic. Idyllic, that is until a dead body shows up half-hidden under the bushes of the communal garden. Now rumors of bootleggers, American gangsters, and an international liquor smuggling operation via black ships have turned everything in their new neighborhood upside down. Alec is assigned by Scotland Yard to ferret out the truth behind the dastardly dead-but it's up to Daisy to find out who the dead man is, what his relationship to her new neighbors is, why he was murdered, and who did him in!

In March of 1926, Daisy Dalrymple Fletcher and her friend and collaborator, Lady Lucy Gerald, head off for several days to a stately home reputed to have the best grotto in the country. Working on a book of architectural follies, they plan to research and photograph it. Leaving her husband and young twins behind, Daisy is expecting a productive wee...

Seething resentments, well-kept family secrets, and a savage murder set the stage for Christmas in Cornwall in this cozy holiday installment of the Daisy Dalrymple mysteries. In December 1923, the formidable Dowager Viscountess Dalrymple has decided that for Christmas the family will all gather at Brockdene in Cornwall at the invitation of Lord Wes...

In late 1926, the newly married Daisy Dalrymple and Detective Chief Inspector Alec Fletcher of Scotland Yard take an ocean voyage to America for their honeymoon. Daisy and Alec are accompanied by Daisy's childhood friend Phillip Petrie, his wife, Gloria, and Gloria's father, American millionaire industrialist Caleb P. Arbuckle, and all are looking...

In late 1923 the newly married Daisy Dalrymple and her husband, Detective Chief Inspector Alec Fletcher of Scotland Yard, come to America for a honeymoon visit. In the midst of a pleasure trip, however, both work in a bit of business-Alec travels to Washington, DC to consult with the US government, Daisy to New York to meet with her American magazi...

May the best man die! In July of 1923, the Honorable Daisy Dalrymple travels to Henley-on-Thames to visit her aunt and uncle, as well as to work on her latest writing assignment: covering the Henley Royal Regatta for an American magazine. Daisy plans a simple trip researching her article, enjoying the races, and, come the weekend, having a pleasant...

In September 1926, the Honourable Daisy Dalrymple Fletcher visits Sybil Sutherby, a school friend now living in Derbyshire as the confidential secretary to a novelist. Suspecting that something is seriously amiss, Sybil has asked Daisy to discretely investigate. Upon arrival, Daisy finds a household of relatives and would-be suitors living off the...