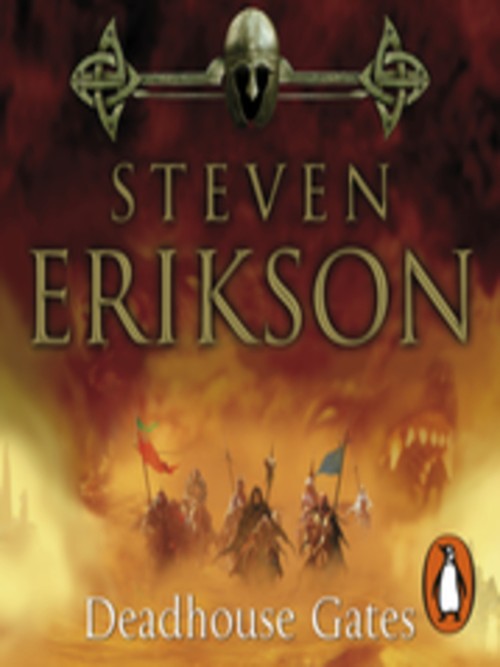 
Random House presents the audiobook edition of Deadhouse Gates: Malazan Book of the Fallen 2 by Steven Erikson, read by Ralph Lister.
Weakened by events in Darujhistan, the Malazan Empire teeters on the brink of anarchy. In the vast dominion of Seven Cities, in the Holy Desert Raraku, the seer Sha'ik gathers an army around her in preparation for the long-prophesied uprising named the Whirlwind. Unprecedented in its size and savagery, it will embroil in one of the bloodiest conflicts it has ever known: a maelstrom of fanaticism and bloodlust that will shape destinies and give birth to legends...
In the Otataral mines, Felisin, youngest daughter of the disgraced House of Paran, dreams of revenge against the sister who sentenced her to a life of slavery. Escape leads her to raraku, where her soul will be reborn and her future made clear. The now-outlawed Bridgeburners, Fiddler and the assassin Kalam, have vowed to return the once god-possessed Apsalar to her homeland, and to confront and kill the Empress Laseen, but events will overtake them too. Meanwhile, Coltaine, the charismatic commander of the Malaz 7th Army, will lead his battered, war-weary troops in a last, valient running battle to save the lives of thirty thousand refugees and, in so doing, secure an illustrious place in the Empire's chequered history. And into this blighted land come two ancient wanderers, Mappo and his half-Jaghut companion Icarium, bearers of a devastating secret that threatens to break free of its chains...
Set in a brilliantly-realized world ravaged by anarchy and dark, uncontrollable magic, Deadhouse Gates is the thrilling, brutal second chapter in the Malazan Book of the Fallen. A powerful novel of war, intrigue and betrayal, it confirms Steven Erikson as a storyteller of breathtaking skill, imagination and originality - a new master of epic fantasy.
(c) 2000, Steven Erikson (P) 2019 Brilliance

SeriesMalazan Book of the Fallen, Book 5

Random House presents the audiobook edition of Midnight Tides: Malazan Book of the Fallen 5 by Steven Erikson, read by Michael Page. After decades of warfare, the five tribes of the Tiste Edur have finally united under the implacable rule of the Warlock King of the Hiroth. But peace has been exacted at a terrible price - a pact made with a hidden p...

Random House presents the audiobook edition of Memories of Ice: Malazan Book of the Fallen 3 by Steven Erikson, read by Ralph Lister. The ravaged continent of Genabackis has given birth to a terrifying new empire: the Pannion Domin. Like a fanatical tide of corrupted blood, it seethes across the land, devouring all who fail to heed the Word of its...

SeriesMalazan Book of the Fallen, Book 1

Random House presents the audiobook edition of Gardens Of The Moon: (Malazan Book Of The Fallen 1) by Steven Erikson, read by Ralph Lister.Bled dry by interminable warfare, infighting and bloody confrontations with Lord Anomander Rake and his Tiste Andii, the vast, sprawling Malazan empire simmers with discontent. Even its imperial legions yearn fo...

SeriesMalazan Book of the Fallen, Book 4

Random House presents the audiobook edition of House of Chains: Malazan Book of the Fallen 4 by Steven Erikson, read by Michael Page. In Northern Genabackis, before the events recounted in Gardens of the Moon, a raiding party of savage tribal warriors descend from the mountains into the flat lands. For one among them, Karsa Orlong, it marks the beg...