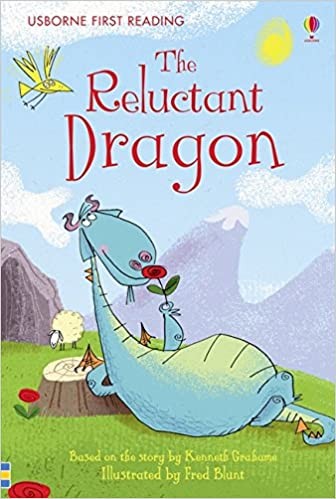 
This is a collection of four dragon stories. In 'The Reluctant Dragon', a boy discovers a dragon in a nearby cave. The villagers want to send for St George to slay him, but he is a friendly dragon and doesn't want to fight! In 'The Island of Nine Whirlpools', a princess is imprisoned and a suitor has to get past the dragon in order to marry her. In 'The Fiery Dragon', Princess Sabrinetta is kept in a dragon-proof tower, but a fiery dragon is roaming the neighbourhood. Finally, in 'The Last Dragon', the King of Cornwall's daughter doesn't want to be tied to a rock awaiting a prince to rescue her from the clutches of a dragon. In any case, there is only one dragon left alive.

The Boy lives in a cottage with his mother and father, and the Dragon lives in a cave on the Downs. He's not the sort of dragon one might expect to meet, however - he's polite and friendly and just wants to lead a quiet life. So when St George comes along with the aim of fighting him, the Boy needs to do some persuading. After all, George and the D...

Portraying each character in his own inimitable fashion, Alan Bennett reads the original story of Ratty, Mole, Badger and, of course, Toad.

The tales of Ratty, Mole, Badger and Toad. When Mole goes boating with Ratty instead of spring-cleaning, he discovers a whole new world. As well as the river and the Wild Wood, there is Toad's craze for fast travel which leads him and his friends on a whirl of trains, barges, gipsy caravans, motor cars and even into battle.

Wind In the Willows

Wind In the Willows

Many of the original cast from Alan Bennett's acclaimed National Theatre production appear in this special dramatisation for BBC Radio 4 including Richard Briers as Rat, Adrian Scarborough as Mole and Terence Rigby as Albert with Alan Bennett as the narrator. A wonderful, highly-acclaimed dramatic performance of a classic novel.