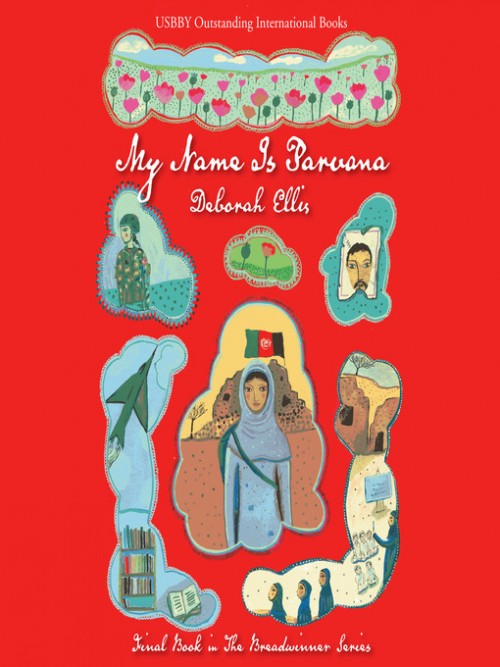 My Name is Parvana


In this stunning sequel to The Breadwinner Trilogy, Parvana, now 15-years-old, is found in a bombed-out school and held as a suspected terrorist by American troops in Afghanistan.
The girl does not respond to questions in any language and remains silent, even when she is threatened, harassed, and mistreated over several days. The only clue to her identity is a tattered shoulder bag containing papers that refer to people named Shauzia, Nooria, Leila, Asif, Hassan — and Parvana. As she waits for foreign military forces to determine her fate, she remembers the past four years of her life. Reunited with her mother and sisters, she has been living in a village where her mother managed to open a school for girls. But when local men threaten the school, she must draw on every ounce of bravery she possesses to survive the disaster that kills her mother and destroys the school. Ellis' final novel in the series is harrowing, inspiring, and thought-provoking.

That was where she needed to be, in a field of purple flowers, where no one could bother her. She would sit there until the confusion left her head and the stink of the camp left her nostrils.Shauzia has a dream. She dreams of getting away from the refugee camp in Pakistan and travelling to France. There she knows she would find a better life, away...

&lsquo;My life is dust and rocks and rude boys and skinny babies, and long days of searching for my mother when I don&rsquo;t have the faintest idea where she might be.&rsquo;Parvana is alone. Her father is dead. A refugee in a land full of dangers, she must travel across Afghanistan to find her mother and sisters.As she travels, Parvana finds frie...

Imagine living in a country in which women and girls are not allowed to leave the house without a man. Imagine having to wear clothes that cover every part of your body, including your face, whenever you go out. In this powerful and realistic tale, eleven-year-old Parvana lives with her family in one room of a bombed-out apartment building in Kabul...