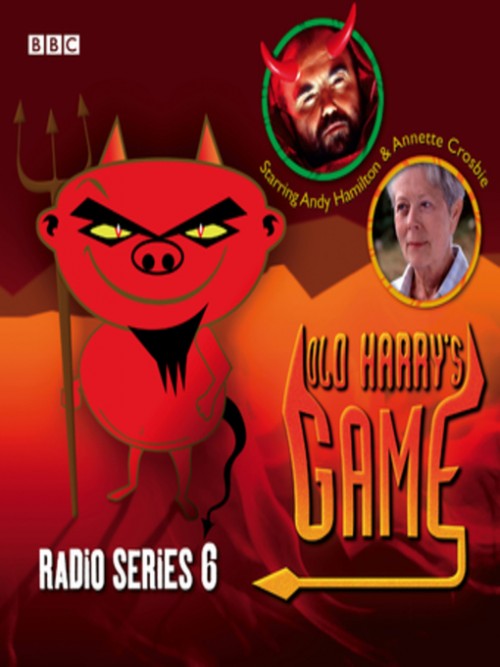 
The complete sixth series of the fiendishly funny award-winning comedy, starring Andy Hamilton and Annette Crosbie. All six episodes from the sixth series of BBC Radio 4's Sony Award-winning comedy set in Hell. It's not easy being Satan. There are the long hours (that stretch into eternity), and Hell seems to have more admissions than it can cope with. One of the new arrivals is Edith, a historian, athlete and humanitarian. And she's trouble: she refuses to believe she's dead, she knows Thomas and she's not afraid of Satan. But will the Grand Tour, which includes the Pit of Musicians, the Lake of Fire and the Pit of Health and Safety Inspectors, finally make her realise where she's ended up? At least Satan still knows how to have his fun: he's sneaked more teeth into Cherie Blair's smile.

It's not easy being Satan. Thrown out of heaven by a vengeful, white-haired God for daring to voice the concerns of middle management and condemned for all eternity to listen to Edith Piaf and Elvis Presley. Still, there are new arrivals to welcome: the Professor, an atheist whose unerring optimism is a nasty blow, and Thomas, chairman of a privati...

Two fantastic festive episodes of Andy Hamilton's fiendishly funny Sony Award-winning BBC Radio 4 comedy. It's the most wonderful time of the year, but Satan isn't in a very Christmassy mood. In 'Christmas Spirit', he is busy dealing with the seasonal rush. Tired of Hell being inundated with drunken morons who died doing something completely stupid...

The second in the series. Trevor and Sammy are the movers and shakers at agency TS Sports Stars. Yet although friends for 20 years and business partners for nine, they are chalk and cheese

Andy Hamilton's hell-ariously entertaining complete 3rd series of this most excellent Radio 4 award winning comedy. Satan may rule the roost, but he's beset by the poor unfortunates condemned to sit out Eternity with him. Amongst them is the Professor, who is convinced that societies evolve and mature until Satan introduces him to Bill Clinton. The...

2010's first fantastic festive episode of Andy Hamilton's fiendishly funny Sony Award-winning BBC Radio 4 comedy. It's the most wonderful time of the year, but Satan isn't in a very Christmassy mood. He is busy dealing with the seasonal rush. Tired of Hell being inundated with drunken morons who died doing something completely stupid at the office...

2010's final fantastic festive episode of Andy Hamilton's fiendishly funny Sony Award-winning BBC Radio 4 comedy. 'Ring in the New' sees Satan feeling fed up with the relentless chaos and grimness of Hell. So when Edith suggests a relaxing minibreak, he heads off to the Lake District - leaving Scumspawn in charge...

Andy Hamilton and Jay Tarses' script for Revolting People, about the American War of Independence, winningly mixes the `boom boom' school of jokes, literary silliness (jeopardy means `like a jeopard') and anachronisms which make deft political points. Hamilton and Tarses, who has written for the Muppets and the Bob Newhart Show, appear alongside Ja...

The first series of Andy Hamilton's BBC Radio 4 comedy about sports PR agent Trevor. Trevor and Sammy are the movers and shakers at TS Sports Stars agency. Friends for twenty years, and business partners for nine, they are chalk and cheese: Trevor is thoughtful, honest and sensitive while Sammy is a rapacious dealmaker with the morals of a hyena. I...

Satan's got the health inspector in and it seems that the lighting in hell isn't up to scratch but that's the least of his worries, with bad Feng-Shui, no sleep and some atrocious poetry not even Helen of Troy can perk up his day. Another hex-allent series from one of the writers of Revolting People and Trevor's World of Sport.

The complete seventh series of the fiendishly funny award-winning comedy, starring Andy Hamilton, Annette Crosbie and Timothy West. Jean Paul Sartre said, 'Hell is other people'. But, as Satan will tell you, Hell is actually a fiery, unendingly cruel domain where Oliver Reed can never quite catch the barman's eye and Yves St Laurent is forced to we...