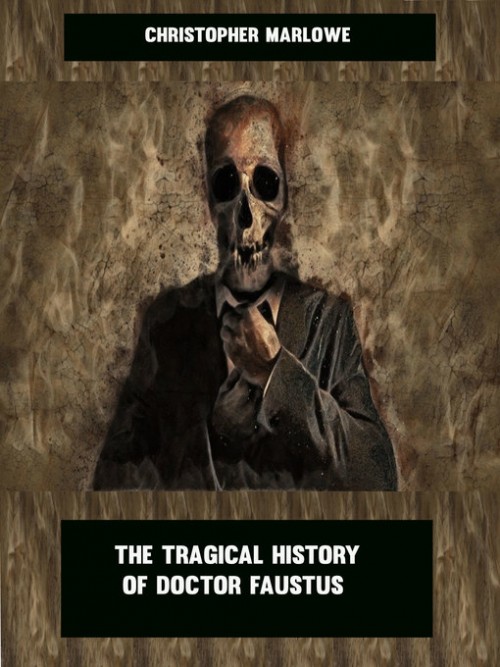 The Tragical History of Doctor Faustus


The Tragical History of the Life and Death of Doctor Faustus, commonly referred to simply as Doctor Faustus, is an Elizabethan tragedy by Christopher Marlowe, based on German stories about the title character Faust, that was first performed sometime between 1588 and Marlowe's death in 1593. Two different versions of the play were published in the Jacobean era, several years later. One of the most durable myths in Western culture, the story of Faust tells of a learned German doctor who sells his soul to the devil in exchange for knowledge and power. Early enactments of Faust's damnation were often the raffish fare of clowns and low comedians. But the young Elizabethan playwright Christopher Marlowe (1564-1593) recognized in the story of Faust's temptation and fall the elements of tragedy. In his epic treatment of the Faust legend, Marlowe retains much of the rich phantasmagoria of its origins. There are florid visions of an enraged Lucifer, dueling angels, the Seven Deadly Sins, Faustus tormenting the Pope, and his summoning of the spirit of Alexander the Great. But the playwright created equally powerful scenes that invest the work with tragic dignity, among them the doomed man's calling upon Christ to save him and his ultimate rejection of salvation for the embrace of Helen of Troy. With immense poetic skill, and psychological insight that foreshadowed the later work of Shakespeare and the Jacobean playwrights, Marlowe created in Dr. Faustus one of the first true tragedies in English. Vividly dramatic, rich in poetic grandeur, this classic play remains a robust and lively exemplar of the glories of Elizabethan drama.

Susie Dent is here to take children on a rip-roaring tour through some of the most astonishing, amusing and sometimes quite revolting backgrounds of English words. Did you know, for instance, that 'fizzle' originally meant to break wind silently? Over time, it came to describe a weak, spluttering, hissing sound. And you might think that 'ain't' isn...

An Interview With Robin Stevens

An Interview With Robin Stevens

We speak to the author of the very popular children's series, A Murder Most Unladylike.

Hardy was a writer whose work highlighted the changes that were taking place as the Victorian age moved into the modern age of the 20th century. This audio book provides an excellent introduction to his work for students at KS3 and KS4.

Edward, preoccupied by the banishment of his lover, Gaveston, barely acknowledges the nascent crises that threaten his realm. Chief among his critics is the morally righteous Mortimer, horrified by the king's criminal lapse of duty and yet able to countenance the further crime of taking arms against his king. As their enmity develops, and Mortimer'...

Writers In Britain: The Romantic Poets

Writers In Britain: The Romantic Poets

This audiobook looks at the lives of six extraordinary poets (Blake, Wordsworth, Shelley, Coleridge, Byron and Keats) whose work helped shape the Romantic movement, and examines the historical, political and social background that influenced them.

Axed Between the Ears: A Poetry Anthology

Axed Between the Ears: A Poetry Anthology

David Kitchen's selection of modern poets covers a wide range of topics, from were-wolves to Vietnam, and has something for everyone. Poets reflect the diversity of contemporary writing and include Michael Rosen, Pat Arrowsmith, Adrian Henri, Edwin Brock, Elizabeth Jennings and Tony Connor.

This revision guide to Shakespeare's 'Macbeth' leads you painlessly through the plot, exploring characters and explaining historical detail in ordinary, straightforward language. This is ideal for helping you with your Key Stage 3 English SATS.

With CliffsNotes Audio, there's no reading required - just listen and learn! Learn about the life and background and the author, preview the literary work through the Introduction and Brief Synopsis, explore the themes, literary devices and development of characters with the Critical Commentaries, examine in-depth Character Analyses and Critical Es...

Stories For Boys Who Dare To Be Different

Stories For Boys Who Dare To Be Different

Prince charming, dragon slayer, mischievous prankster... More often than not, these are the role-models boys encounter in the books they read at home and at school. As a boy, there is an assumption that you will conform to a stereotypical idea of masculinity. What if you prefer to pick up a book rather than a sword? What if you want to cry when you...

This book explains everything KS2 students will need to know about Grammar, Punctuation and Spelling for the English SATS. There are plenty of examples to demonstrate each point, with quick recap questions for every topic and exam-style tasks at the end of each section.