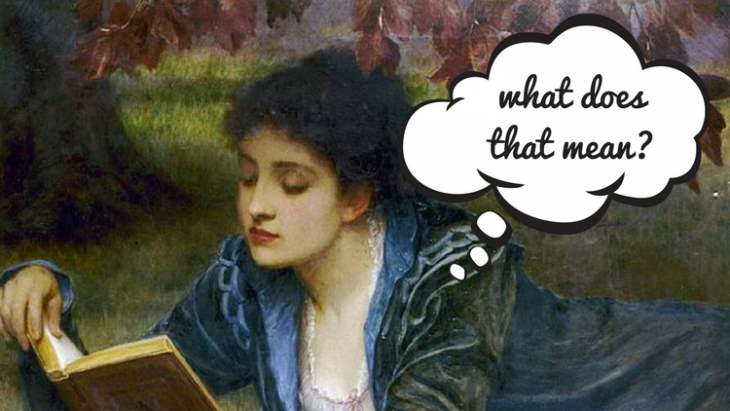 We've all been there. You're listening to a classic novel, and then suddenly you hear something so strange you have to pause the audiobook and replay it. Did that narrator really just say that?

This doesn't just happen in classics. Authors of historical fiction often use historical slang to make their settings more realistic. Here are some of the best old slang expressions from the past that are inadvertently hilarious now:

An illustration from Pierce Egan's Life in London

Yes, this is real historical slang, which you can find in Georgette Heyer's Regency novel Frederica.

During the Regency period, it became fashionable for young gentlemen to use the language or "cant" of the lower classes. One of the most famous publications of the time was called Life in London by Pierce Egan. Published monthly from 1821, it followed three fictional men about town, Tom, Jerry and Logic, who were based on its writers - Isaac Richard, George Cruickshank, and Pierce Egan. It became an overnight success, because it incorporated phrases from the lower classes, where the three men often mixed. And one of the most inadvertently funny slang phrases it repeated was dicked-in-the-nob.

At the time 'nob' meant head, and so dicked-in-the-nob meant silly. Hilarious now, but totally understandable then.

One of the greatest sources of hilarious old slang expressions is A Classical Dictionary of the Vulgar Tongue. It was published by Frances Grose in 1785, almost thirty years after the very first dictionary was published by Dr Johnson, and included all the definitions Johnson had deemed too rude for his own effort. To compile his dictionary, Grose spent time eating, boozing, and listening to conversations in pubs in London. He enjoyed spending time collecting slang words with his assistant, who was hilariously called Tom Cocking.

Lots of the slang recorded in his dictionary has survived to the present day. For example, in 1785 people also said 'birds of a feather' to mean people who are similar, and 'the pot calling the kettle black' to mean hypocrisy. However, there is much that hasn't survived into modern speech, and one of those is the slang 'cackling farts' to mean eggs. Presumably, as Grose also defines a 'cackler' as a chicken based on the noise the bird makes, this was simply a natural progression!

Also defined in A Classical Dictionary of the Vulgar Tongue, this phrase sounds hilarious but just means to vomit.

Shoot into the Brown

Hold on, hold on. This definitely isn't what you're thinking. 'Shoot into the Brown' was actually a Victorian slang term for failure. In 1909 Andrew Forrester published Passing English of the Victorian Era, another slang dictionary. In it, he describes how the phrase 'shoot into the brown' derives from rifle practice. A shot so bad that it missed the black and white target completely and instead ended up in the mud was said to have 'shot into the brown'.

'Bags of mystery' was blackly humourous Victorian slang for sausages, referring to their often uncertain contents. This term arose around 1850, but remained popular long after sausages started to be made of nicer ingredients. As this is still definitely a problem in the modern era, however, I think we should revive this one.

According to Google's Ngram viewer, a tool that tracks through books from 1800 onwards, 'Dick's hatband' first made an appearance in the early 1800s:

Like any good slang phrase, it almost immediately went into decline, and then had a renaissance in the 1850s. Since then, it has been up and down in popularity, but it has remained in use.

However, the phrase also appears in Grose's A Classical Dictionary of the Vulgar Tongue, and who defined it as 'out of order, without knowing one's disease'. It also appears in Georgette Heyer novels with the meaning of ill, or faint-looking.

But where did it come from?

A popular story about the origin of this slang expression is Richard Cromwell. His father, Oliver Cromwell, became Lord Protector of England by defeating King Charles in the English Civil War and beheading him. When Oliver Cromwell died, his son became Lord Protector. However, he did not live up to his father's legacy. Uninterested in the English Civil War, he longed for a quiet life in the country with his family. Unsurprisingly, he was deposed after only eight months. Dick's hatband, therefore, apparently refers to the crown of England, a position Richard never wanted.

Unfortunately, Grose's A Classical Dictionary of the Vulgar Tongue undermines this fun story. It defines 'Dick' as 'that happened in the reign of queen Dick, i.e. never: said of any absurd old story'. Perhaps, then, 'queer as Dick's hatband' is just referring to a hat that has never existed?

Equally, in Passing English of the Victorian Era, under the definition for 'Dick's hatband' Forrester asked 'Who was Dick? 'Tis all that remains of him'.

What's your favourite of these old slang expressions? Let us know in the comments!

If you liked this post, you may also like Etymology: Audio - Where did the word come from?