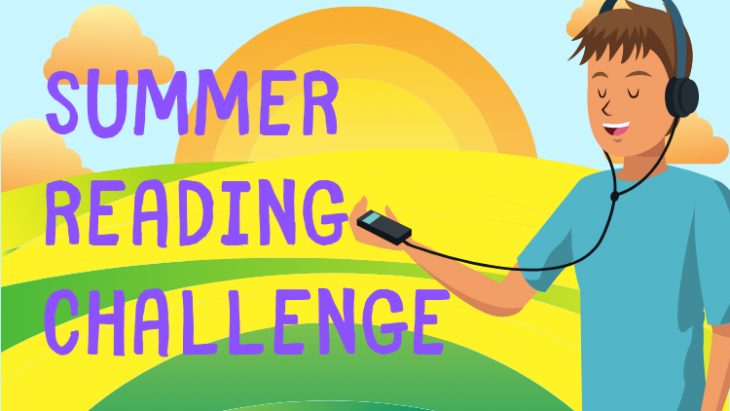 10 Audiobooks to Listen to for the Summer Reading Challenge!

Need some audiobook ideas for your Summer Reading Challenge?

The Summer Reading Challenge takes place every year over the summer holidays. All you have to do to complete it is borrow and read six books from a library!

We want to make sure everyone can take part even if print books are not accessible. So here are 15 audiobooks you can borrow from our library to complete the summer reading challenge:

The theme of the Summer Reading Challenge this year is Space Chase, so what better audiobook to start with than the ultimate guide to being an astronaut?

In this clip find out what happens on an astronaut's launch day! What happens on the day you go to space? And did you know it's traditional for an astronaut crew to sign the door at the cosmonaut hotel where they stay the night before they launch?

Borrow The Usborne Official Astronaut's Handbook from our library.

Okay, so, maybe this isn't 100% about space but this is still one of the best audiobooks to add to your summer reading challenge!

Al Chaudhury has a problem. It's his twelfth birthday and he's received a letter asking him to go back in time to 1984 to save his father's life. Luckily, his Grandpa Byron has a secret time machine. Can he do it without losing his pet hamster, Alan Shearer?

Borrow Time Travelling With a Hamster from our library.

3. The Girl of Ink and Stars - Kiran Millwood Hargrave

Isabella is forbidden to leave the island she's always lived on. When her best friend, Isabella, disappears, she is desperate to find her again. Using her father's old cartography skills she navigates the island's dangerous Forgotten Territories. But when a mythic fire demon starts to stir beneath the ground, Isabella finds her maps lead her to save the island itself.

Borrow The Girl of Ink & Stars from our library.

4. The Dinosaur That Pooped a Planet! - Tom Fletcher and Dougie Poynter

Danny and Dinosaur are going to space! Except that Danny forgot to bring Dinosaur's lunchbox! When Dinosaur gets hungry he eats everything in sight - some cats, the moon, and even their rocket ship! Will they be stuck in space forever? Find out in this audiobook full of poop and planets!

Borrow the audiobook of The Dinosaur That Pooped a Planet! from our library.

With the BBC adaptation due out later this year, Noughts and Crosses is one of those audiobooks you can't miss in your summer reading challenge! It's the story of Sephy, who is a 'Cross' - the dark-skinned ruling class. She has been friends with Callum for most of her life, but he is a 'Nought' - the pale-skinned members of the lower class who used to be enslaved by Crosses. As some Noughts are allowed to attend schools previously only meant for Crosses, Sephy and Callum find themselves in danger.

Borrow Noughts and Crosses from our library.

Did you know that seaweed is used when making bombs? Listen to the above clip from our audiobook of Odious Oceans for even more strange ways seaweed is in your life!

That's only the start of the absolutely disgusting things to learn in this audiobook. Where in the world can you go to eat poisonous pufferfish? Odious Oceans has all this information and lots more!

Borrow the audiobook of Odious Oceans from our library.

7. Truckers: The First Book of the Nomes - Terry Pratchett

Living under the floorboards of a big department store are the nomes. Humans have never seen them, but there are thousands of them, and for a long time they didn't even know about the existence of Outside. Then the news comes that their store is going to be demolished! It's down to Masklin, a nome who comes from the Outside, to come up with a daring escape plan to save the nomes who live in the department store.

Truckers is the start of a trilogy. So, if you start this audiobook during your summer reading challenge then there are two more after!

Borrow Truckers from our library.

If you think that reading a book about maths during the summer holidays is the worst idea in the world, then think again! This is no normal maths book. This book is full of amazing information, like what a googol really is (not a website), why bees like hexagons, and how to tell the time on other planets!

Listen to the above clip all about the amazing fourth dimension and see if you think again about maths!

Borrow Zero to Infinity from our library.

Fifteen-year-old Dylan wants to rob a bank. He doesn't want to do it for himself, though. After Dylan accidentally burnt down the house of the girl he likes, he realises that the only thing that will make it up to her is a big gesture. A big gesture like robbing a bank to pay for her new house. What's the worst thing that can happen?

Borrow How to Rob a Bank from our library.

Real life astronaut Tim Peake answers all the important questions. What happens when you sneeze in space? What's it like to use the toilet? And how does it feel to travel faster than a bullet? If you've ever wanted to know what's involved in becoming an astronaut and all the coolest things about going to space, then this is the place to start. Plus, it even has an introduction read by Tim Peake himself!

Borrow Ask an Astronaut from our library.

What audiobooks are you listening to for your summer reading challenge? Let us know in the comments!

If you enjoyed this post you might also like: Why Children's Books That Teach Diversity Are More Important Than Ever or Back to School Audiobooks For a New Term.

From social care to the benefits system, politicians and media alike have made the case that Britain's 12 million disabled people are a drain on the public purse. ⁠
⁠
In Crippled, leading commentator @frances.ryan85 exposes the disturbing reality, and how disabled people have been turned from society's 'most vulnerable' to benefit cheats.⁠
⁠
The audiobook is available from our library now - find the link in our bio!⁠
⁠
⁠
ID: a wood background with a smart phone showing the audiobook of Crippled on the Listening Books website⁠
⁠
⁠
⁠
#audiobook #audiobooks #listeningbooks #audiobookstagram #crippled #drfrancesryan #disability #disabled #disabilityawareness #chronicillness #disabilityinclusion #disabilitycharity #ukcharity #inclusion #charitiesofinstagram