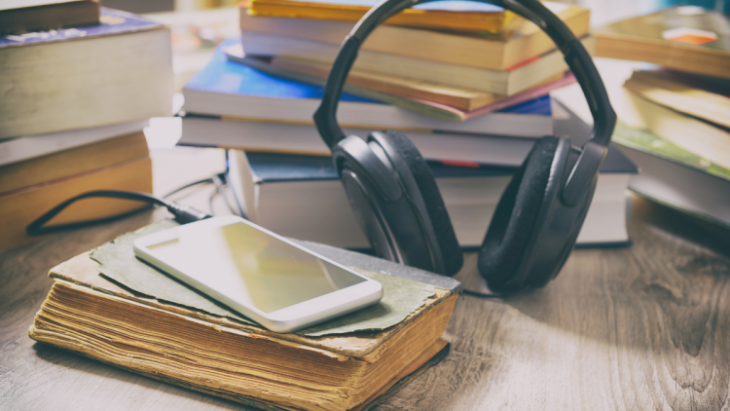 23 Celebrity Autobiographies Read by the Author

What's even better than getting to know more about your famous celebrity? Having them read it in their own voice!

So, what makes a good autobiography audiobook? Not just finding out more about them, but the author investing in the narration. Maybe you can hear them holding back a laugh at a memory as they read, or sometimes even a tear.

Here are 23 of our favourite audiobooks read by the author:

1. Peter Crouch: How to be a Footballer

Rather than a traditional autobiography of the former England player and podcaster, this audiobook is more of a window into the weird and wonderful world of professional football. You'll discover the egos and eccentricities of some of football's biggest names, including what Christiano Ronaldo says when he looks at himself in the mirror, and which player has so many cares he forgot he left a Porsche at a train station!

Borrow How to be a Footballer from our library

In her powerful and captivating memoir, the former First Lady of the United States reflects on the experiences that have shaped her into the iconic woman she is today. Michelle Obama will take you on a journey from her childhood in Chicago to her time spent in the White House. This profoundly personal story of a woman who has stood up to prejudice, defied expectations, and inspired so many others to do the same, is beautifully narrated by the woman herself.

Borrow Becoming from our library

3. Henry Blofeld: Over and Out

Henry Blofeld narrates his autobiography with the same cultured and charismatic tone that listeners of Test Match Special will recognise and love. As well as his experiences commentating on the cricket field, Henry also talks about his travels and favourite countries - as well as what it's like meeting and interviewing so many cricket-loving celebrities.

Borrow Over and Out from our library

If you've seen Chris Packham on Springwatch, then you'll want this audiobook. The TV wildlife expert recalls his somewhat lonely but unique childhood, which was dominated by his obsession with nature. He brilliantly brings to life his adventures as a young naturalist trying to exercise his passion for wildlife in a world that doesn't always understand him.

Borrow Fingers in the Sparkle Jar from our library

When he was just 26, a then-unknown David Attenborough applied for a job at BBC Radio. After his application was rejected someone saw his letter and asked whether he would like to try television instead. In this often very funny memoir, David gives a detailed background into his numerous TV programmes, and even recalls how he introduced colour television to the UK! If David Attenborough is a perfect narrator for TV, he's even better on this audiobook!

Borrow Life on Air from our library

6. Sarah Millican: How to be Champion

This is not just an autobiography. This is also a guide-to-life for anyone who feels like they may need a little encouragement from one of Britain's most loved comedians. No one else could tell the story of Sarah's studious teenage years, her divorce in her twenties, and her discovery of stand-up comedy, and she is just as hilarious and lovable narrating this audiobook as she is on stage.

Borrow How to be Champion from our library

7. Michael Caine: The Elephant to Hollywood

Maurice Micklewhite, otherwise known as Michael Caine (seriously), looks back over his extraordinary life to share some anecdotes with us. He describes how was born with rickets in 1930s poverty stricken Elephant in Castle to his glittering, five-decade career in Hollywood. This audiobook really benefits from being read by the author. A must listen.

Borrow The Elephant to Hollywood from our library

In Everywoman, Jess Philips, Labour MP for Birmingham Yardley, uses her famously frank and funny tone to illustrate gender relations in both parliament and the wider world. She narrates in an empowering way, exploring the idea that although speaking out for what you believe in is far from easy, it is absolutely essential if we are to make a difference.

Borrow Everywoman from our library

The comedian, actor, author (and, of course, Listening Books patron) will tell you all about some of the lesser known, but more chaotic years of hs life. Be prepared to be moved, amused, and surprised in this poignant and honest autobiography written and narrated by one of the most influential figures in British popular culture.

Borrow The Fry Chronicles from our library

If you had to choose one autobiography read by the author, then this would be it! Even if you've already read the print book, it's definitely worth getting the audiobook too. Eddie tells so many little stories and anecdotes that aren't in the print version that it's almost a different book! Eddie's story begins with a little boy who lost his Mum, and ends with him becoming an iconic comedian, actor, activist and marathon runner, who's a national treasure at the top of his game.

Borrow Believe Me from our library

Actor Nick Frost has had a vibrant and varied career. You may remember him from his explosive debut as the idiotic TA expert Mike in Spaced, or from his more recent appearances in Hollywood blockbusters. But it's not always been a haze of glitz and glamour. Nick's story is both hilarious and heart-breaking as he recounts a difficult childhood and the personal demons that have plagued his extraordinary life.

Borrow Truths, Half Truths and Little White Lies from our library

This audiobook exposes events that occurred on one of the most famous film sets in history. Carrie reveals the joys and madness of a lifestyle that is the inevitable result of international fame. She looks back at her time on the first Star Wars movie, and her feelings at the time. Her daughter, Billie Lourd, narrates excerpts from her handwritten notebooks she kept at the time. Listening to her reading from the youthful naivete of her diaries is all the more poignant now.

Borrow The Princess Diarist from our library

In the 1980s, Benjamin’s poetry was heard at street demonstrations and protests. In the 1990s he performed in every continent in the world and began a life-long friendship with Nelson Mandela, which led to Benjamin’s work with children in South Africa. This incredible life story celebrates the power of poetry and the necessity of pushing boundaries.

Borrow The Life and Rhymes of Benjamin Zephianiah from our library

14. Clare Balding: My Animals and Other Family

Clare Balding grew up in a rather unusual household. She shared her life with more than 100 thoroughbred racehorses, mares, foals and ponies. She and her younger brother came very low down in the pecking order. Left to their own devices, they had to learn life's toughest lessons through their animals. For Clare, this was worse, as the running joke was that "women ain't people". In this funny, brave, and tender story of self-discovery, Clare shows how she proved them wrong and literally makes her voice heard.

Borrow My Animals and Other Family from our library

Born to Run is the enthralling result of Bruce Springsteen dedicating seven years to writing the story of his life. He describes growing up in a Catholic family in New Jersey and vividly recounts his relentless drive to become a musician and the rise of the E Street Band. With a bold frankness he recalls the determination and struggles that produced and inspired his best work.

Borrow Born to Run from our library

Women have undeniably had it a bit easier over the last few decades – they can vote, take the Pill – and they haven’t been burnt as witches for ages! However, childless women do keep being asked when they are going to have a baby. Are women supposed to get botox? What about a Brazilian? When is taking off your clothes wrong and when is it empowering? In this book which is partly a memoir covering her unconventional upbringing and partly an passionate tirade, Caitlin explores what it means to be a modern woman.

Borrow How to be a Woman from our library

Taking us from the early days of the Sydney stand-up scene to eventually becoming one of the best-known comedians on British TV, Best Foot Forward is an utterly hilarious and honest collection of stories about Adam's ups and downs in the world of comedy. It's an exploration into positivity and celebrating what makes you unique.

Being an introvert in a world that glorifies cool isn't easy. But when Issa Rae, the creator of the Shorty Award-winning hit series The Misadventures of Awkward Black Girl, is that introvert - it sure is entertaining. Written in her witty and self-deprecating voice, Rae covers everything from cybersexing in the early days of the Internet to deflecting unsolicited comments on weight gain, from navigating the perils of eating out alone to learning to accept yourself - natural hair and all.

Borrow The Misadventures of Awkward Black Girl from our library

In Brave Rose McGowan charts her many years of experience working in an industry dominated by misogyny. She reveals how, even as her private life was continually documented in the press, she refused to give in to the sexualised identity she was given by the film industry. Rose boldly discovered her true identity and in this book, exposes Hollywood’s ingrained sexism and encourages everyone to be brave and true to who they are.

Borrow Brave from our library

The Hollywood actress uses her wry sense of humour to detail the absurdities and embarrassing encounters that are all part of the journey when you’re on your way to stardom.  This collection of sharp, surprising and very funny autobiographical essays chart Anna’s rise from ‘scrappy little nobody’ to star of stage and screen.

Borrow Scrappy Little Nobody from our library

21. Bridget Christie: A Book for Her

Part memoir, part essay and partly a collection of extracts from her stand up, A Book For Her is the writer and comedian’s hilarious and very accessible exploration into feminism. Christie expertly delves into both the serious and the frivolous in this thought-provoking, very funny book. In her words; “If you're interested in comedy and feminism, then this is definitely the book for you. If you hate both then I'd probably give it a miss.”

Borrow A Book for Her by Bridget Christie

The comedian, writer and presenter invites you into her eccentric world with her hilarious, imaginative and sensitive memoir that will have you laughing out loud on one page and moved to tears on the next. If you've missed Sue Perkins on The Great British Bake Off, then this audiobook should be your next listen!

Borrow Spectacles from our library

The comedian, writer and director shares stories from his life alongside clips from his stand up shows. As well as telling hilarious anecdotes about embarrassing himself at parties and hallucinating in the Amazon rainforest, he also tackles more difficult subjects such as anxiety and depression in a book that is both poignant and very, very funny.

Borrow Help from our library

What is your favourite autobiography read by the author? Let us know in the comments!

If you liked this post, you may also like: 5 Reasons Listening to an Audiobook Counts as Reading or Audiobook Recommendations Based on Your Favourite Netflix Original.