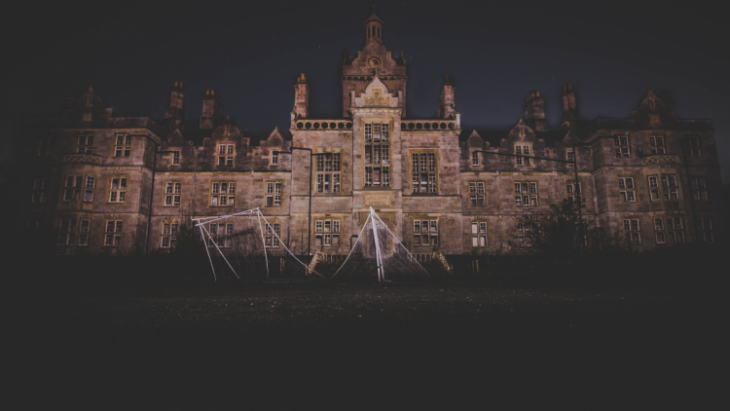 13 Scary Books to Really Frighten You

A good story will take you on a journey and immerse you in its world. A good scary story will do those things and frighten you silly!

The autumn is the perfect time to curl up with scary stories. It's darker outside, trees are losing their leaves, and Halloween is just around the corner. But what one to choose? Well, not all scary stories are horror (although lots of them are). Sometimes the scariest story is a near future dystopia. Whether you like zombies, haunted houses, or totalitarian society, we've collected 13 scary books to read if you want to really terrify yourself!

All these are available as audiobooks from our library.

Bird Box became famous after Netflix adapted it into a film, but the book is just as (if not more) scary. It follows a woman who must guide herself and her children away from unseen monsters who, if seen, would drive them mad. You'll be too frightened to look behind you while reading this!

What list of scary books would be complete without an entry from Stephen King? If you've only seen the film of this terrifying tale then get ready. Teenage Carrie White, suffering under the religious zeal of her mother and bullying from school, discovers she is able to use telekinesis. In the process of enacting revenge on those who have hurt her she destroys the town she lives in. Carrie is a gruesome and terrifying reminder of how it feels to be a bullied teenager, which makes it a definitive choice for any horror fan!

This may not be your typical horror story, but it's still terrifying. Offred is named for her function - literally, 'of Fred', the name of the man who keeps her for the purposes of reproduction. In a dystopian future America, now called Gilead, Offred has no choice but to have a baby for him, or face death. This eerie book is so scary precisely because it is possible. Margaret Atwood herself has said she didn't imagine anything, just fictionalised things that had happened to women in history, and that idea is, frankly, chilling.

4. We Have Always Lived in the Castle - Shirley Jackson

The Haunting of Hill House has always been one of the most recommended scary books by Shirley Jackson, but We Have Always Lived in the Castle should get just as much interest. It is the extremely unsettling story of the Blackwood sisters living in isolation. The locals are convinced they are murderers. After all, several years ago almost the whole Blackwood family was poisoned, and the remaining members are struggling to keep their hold on the world. Claustrophobic, haunting, foreboding - this is a short but scary choice to really frighten you.

This may not be a typical ghost story, but the spectre of slavery still makes it a terrifying tale. It tells the story of Sethe, who was born into slavery, but escaped to Ohio eighteen years ago. She is haunted by the memories she has of Sweet Home, the plantation where she once worked. And her new home is haunted by a revenant, which everyone believes is the ghost of her child, who died nameless, and whose grave is inscribed only with the word Beloved. If you like your scary books to be absolutely dripping with terror, then this is the choice for you.

Coraline has just moved into a new house with her parents. One day, while exploring, she finds a door. On the other side is the same house, except it seems different. The food is better there. And there's another mother and father on the other side of the door. They want to keep Coraline with them forever. This is a story aimed at children and has all the magic of a fairy story, but don't be fooled: it's just as frightening as any adult horror story!

The absolute classic of all scary books: the haunted house story. Belasco House has been empty for over twenty years. But now four people have come to the house to try and understand its mysteries. They have all been paid by a man who wants to understand life after death. But all four of them will come to discover why the local people call Belasco House the Hell House. Although outdated in some ways, this is still a true classic of the genre that's worth getting frightened by.

The Girl with all the Gifts - M R Carey

This is a zombie story with a difference. Melanie starts the story locked in a cell waiting to be taken to school. She has to sit strapped to a chair while Sergeant Parks points his gun at her. Then, it all goes wrong. If you think you've read all the monster-lit there is, then this will change your mind. The idea behind it is original, and terrifying. The ending is both hopeful and bleak. A new zombie classic.

The Turn of the Screw - Henry James

The Turn of the Screw is probably one of the most successful ghost stories ever written. Set on Christmas Eve, a governess tasked with looking after two children on a remote country estate becomes convinced that the grounds are haunted. Soon, she begins to think that the two children are aware of the presence of ghosts. This is a short but impactful story that builds tension so well it will stay with you for long after you've finished reading.

The Witches may be the first scary book that many people read as children. Witches could be anyone - they might look normal, have normal jobs, and even be nice! But underneath it all, they could be terrible. That's something that will resonate with every child (and adult) reading this book, but its Roald Dahl's distinctive style that makes this story so frightening. The boy who stands up to The Grand High Witch may be brave, but she is evil, and evil has consequences.

If you're at all into horror, then you've probably heard of The Amityville Horror. Chances are, though, you didn't know the film was based on a book! Set in 1975, the book follows the Lutz family as they move into their new home in suburban Long Island, USA. A year ago the former resident of the house, Ronald DeFeo, murdered his family in the house. But the price of the house was so reasonable, they couldn't possibly not buy it. However, after twenty-eight days, the entire Lutz family flees the house. What happened there? Find out, if you dare!

I tried not to have too many Stephen King titles on this list of scary books, but I couldn't resist adding Misery too! Paul Sheldon is a bestselling writer who has just killed off his most famous heroine, Misery Chastain. Except, Annie Wilkes, Paul's biggest fan, isn't having any of it. After a car accident, Annie traps Paul in her house and forces him to keep writing the story of Misery. If you've ever read a book and loved the characters so much you didn't want to leave them behind, then this story will feel all too real.

No list of scary books could be complete without this dystopian classic. In the near-future, the country has been taken over by the Party, a totalitarian government that is in constant war with other superstates around the world. Winston Smith works for the Ministry of Truth, working and un-working written material so that it suits the propaganda needs of the Party. The most terrifying thing about this book isn't what Orwell imagined the near future to look like - it's how the Party influences and changes the opinion of the public. In the current politically volatile times, this is probably the scariest story of all.

What scary books are you reading this Halloween? Let us know in the comments!

If you liked this post you may also like 8 Spook-Tacular Books to Read This Halloween or 7 Halloween Costume Ideas from Books!