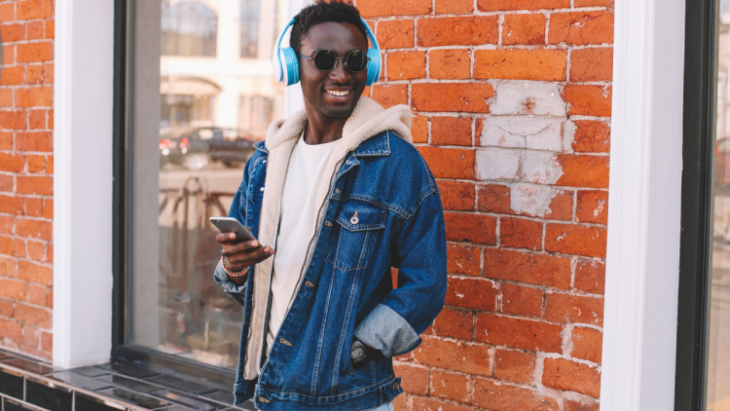 10 Audiobooks to Add to Your Library This Autumn

Here's what audiobooks you'll be listening to this autumn season!

If you're anything like us, when you think of autumn you imagine dusting off your favourite woolly scarf, drinking pumpkin-spiced lattes, and obsessing over Strictly Come Dancing for three months. And, of course, when we want to take a break from practicing the samba in our living rooms (very badly), we like to listen to audiobooks!

We'll be adding over one hundred new audiobooks to our library before Christmas this year, so we wanted to give you just a taster of what's to come!

A small town's popular Little League coach is the prime suspect when an 11-year-old boy is found murdered. Reliable eyewitnesses and forensic evidence all heavily suggest he is the culprit. But the coach has an alibi, and Detective Ralph Anderson is convinced by new evidence that the coach was out of town when the boy was killed. How can he have been in two places at the same time?

Following the huge success of his best-selling Bill Hodges series, Stephen King's new crime thriller will keep you gripped right from the beginning until the unique twist at the end.

How To Fail - Elizabeth Day

Elizabeth Day is an award-winning author and journalist. She has now written this brilliant memoir/manifesto based on her hugely popular podcast of the same name. Through chapters on work, family, relationships, sport, babies, dating, and anger, she explores the premise that understanding why we fail ultimately makes us stronger. This book teaches us not to be afraid to learn from our failures, and that learning how to fail is actually learning how to succeed.

Rosemary is 86 and Kate is 26. They both love outdoor swimming. Rosemary has lived in Brixton all her life, but everything she knows is changing. Kate has just moved and feels lost in London. She's on the bottom rung of her career as a local journalist, and is determined to make something of it. So, when the Lido is threatened with closure, Kate knows this story could be her last chance to shine.

But for Rosemary, the Lido is a reminder of the past and her beloved husband, George. Together they are determined to make a stand, and to prove that the pool is more than just a place to swim - it is the heart of the community.

This heart-warming debut is about the importance of friendship, the value of community, and how ordinary people can protect the things they love.

The Stone Circle is the eleventh book of the popular Dr Ruth Galloway series. DCI Nelson has been receiving threatening letters telling him to 'go to the stone circle and rescue the innocent who is buried there'. He is shaken, not only because, with Michelle's baby due to be born, children are very much on his mind - but also because, although the letters are anonymous, they are somehow familiar.

Meanwhile, Ruth is working on a dig in the Saltmarsh when bones are found on the site. They are identified as those of Margaret Lacey, a twelve-year-old girl who disappeared thirty years ago. As the Margaret Lacey case progresses, the past reaches out for both Ruth and Nelson. And its grip is deadly.

(Good news for Elly Griffiths fans! This is not the only audiobook we'll be adding to our library. We'll have plenty of her books for you to enjoy!)

Hello, My Name is May - Rosalind Stopps

In this addictive debut novel, the sharp and funny May has been left unable to communicate after a stroke. When she's moved to a care home she discovers someone very familiar is living in the room opposite her. As this person charms his way through the care home and makes advances on her new friend, Jackie, all May can do is watch. She's haunted by scenes from the past. How can she keep both herself and Jackie safe when she in a silent and vulnerable state? Hello, My Name Is May is both a powerful study of old age and a gripping thriller that will keep you hooked!

The Blade Itself - Joe Abercrombie

In book number one of The First Law series, infamous barbarian Logen Ninefingers has finally run out of luck. Caught in one feud too many, he's on the verge of becoming a dead barbarian. Dashing but conniving Nobleman Captain Jezal dan Luthar mainly concerns himself with cheating his friends at cards and dreaming of glory in the fencing circle. Inquisitor Glokta would like nothing better than to see Jezal come home in a box. But then, Glokta hates everyone.

War is brewing. On the battlefields of the frozen North they fight by altogether bloodier rules than at Jezal's sword fighting contests. Enter the tempestuous wizard, Bayaz. He could be the First of the Magi. He could be a spectacular fraud. But whatever he is, he's about to make the lives of Logen, Jezal and Glokta a whole lot more difficult.

Don't worry, we won't just be adding the first book of the series. We'll have the whole of The First Law series for you to enjoy soon!

Two brothers meet at the remote border of their vast cattle properties. In an isolated part of Australia, they live hours apart but are also each others nearest neighbour. Their quiet family life has been thrown into tragedy since the death of their brother, Cameron. But why did he die? Did he choose to walk to his death? Because if he didn't then the isolation of the outback leaves few suspects...

Last year everyone was talking about Jane Harper's debut novel The Dry, and with reason! It won both the CWA Gold Dagger Award and the Sunday Times Crime Book of the Year. If you liked that then her 2019 novel The Lost Man will be right up your street because, despite being a standalone, it still features the claustrophobic heat of the Australian outback that Harper is known for.

If you enjoyed The Woman in the Window or The Girl Before then you'll absolutely love this thrilling debut that already has a film adaptation in the works. Alicia Berenson has not spoken a word since she shot her beloved husband six times. Doctors and psychologists have all failed to treat her, but a forensic psychotherapist believes he can break through her silence. He becomes obsessed with her case, and soon discovers that there's more to Alicia's silence than he first realised. And, if she does finally talk, would he want to hear the truth?

If the autumn temperatures are leaving you longing for a bit of sunshine, then this could be the perfect audiobook to transport you back to the summer! In Erica James' new novel, three families meet in the Norfolk Broads, the location of their much-loved holiday home for many years. They all have endless happy memories from their time spent there. But this year, widower Alistair is about to shock his circle of friends with the recent changes in his life that will affect them all. For some, it feels like the end. For others, it might just be the beginning...

In a House of Lies - Ian Rankin

The Godfather of detective fiction, Ian Rankin, returns with his latest Rebus thriller. Detective Inspector Siobhan Clarke has been brought onto a new inquiry to re-examine an old case. A missing private investigator's body was found in the boot of a car, deep in the woods. Every officer involved in the case must be questioned, and it seems everyone on the case has something to hide and everything to lose. But there is one man who knows where the trail may lead - and that could be the end of him: John Rebus.

What audiobooks are you looking forward to listening to this autumn? Let us know in the comments!

Listening Books is a UK audiobook charity. We provide an online and postal library catering for anyone who struggles to read print or hold books. If you or someone you know struggles to read due to an illness or disability and you’d like to find out more about becoming a member of Listening Books, head over to our ‘why join’ page, email info@listening-books.org.uk, or call us on 020 7407 9417. You can also find out about our free membership options.