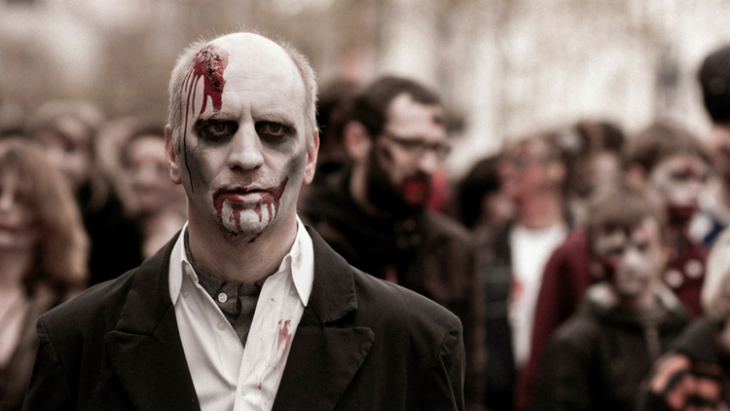 The 'easy' one: Misery - Stephen King

In Stephen King's famous novel, Paul Sheldon is an author who writes the Misery Chastain novels, and Anne Wilkes is a lonesome fan of his work. When he crashes his car she rescues him, and to begin with all seems well. That is, until she reads the latest Misery Chastain novel where the author kills off his most famous creation. Annie's actions when she discovers the novel are unpredictable to say the least.

Annie Wilkes is most famously played by Kathy Bates in the 1990 film adaptation. This character would make a great, simple costume. All you need is plain clothing and carry around a Misery Chastain book. Just don't be a "dirty bird".

The 'traditional with a twist' one: I Am Legend - Richard Matheson

This story has inspired one of the greatest zombie directors of all time, George A. Romero, as well as Interview with a Vampire and other modern vampire novels. In I am Legend, Robert Neville is in a desperate fight for survival against a disease that has spread across the world that has caused people to transform into creatures that resemble vampires. While these particular vampires can be killed in the same way as Bram Stoker's Dracula, you wouldn't need a cape to dress up as one of them. Wear normal clothes, paint your face pale, and get yourself a full set of viciously sharp teeth to show off. there aren't any high "stakes" with this one!

Listening Books members can download and stream I am Legend and Other Stories.

The 'scare kids without being too scary' one: A Series of Unfortunate Events - Lemony Snicket

Count Olaf is the eccentric and devilishly dangerous villain from the twisted mind of Lemony Snicket. The Count will let nothing stand in his way to get his hands on the inherited fortune of the orphaned Baudelaire children, Violet, Klaus and Sunny, who have been left in his care. While his portrayal on film can be comedic or goofy, don't let this fool you! In print, the Count is a conniving, intelligent plotter. Think a smarter version of Dick Dastardly!

The key to this costume is to nail the iconic grey monobrow, wild grey hair (with receding hairline) and pointy chin beard. Combine this with a smart suit and generally acting creepy and you have the perfect Halloween costume.

Listening Books members can download and stream A Series of Unfortunate Events.

The 'ambitious' one: The Lost World - Arthur Conan Doyle

While The Lost World is more of an adventure story than a horror novel, it is certainly worth a listen. The story follows journalist Edward Malone, Professor Challenger, and their group of explorers as they travel through South America to The Lost World. Here, they discover ancient creatures and tribes that end up posing all sorts of problems.

This book is the perfect opportunity to take on the costume of a pterodactyl - sure to wow the crowds! Remember to get the big, pointy head and giant wings! There is plenty of artistic license to be taken, so be creative. It is a tough choice, but to paraphrase that other famous dinosaur story, I'm sure you'll "find a way".

Listening Books members can download and stream The Lost World or borrow it on MP3 CD number 09413.

The 'last minute' one: Dorothy Must Die - Danielle Paige

"I'll get you my pretty, and your little dog too!"

A witch is the quintessential Halloween costume that you can easily pick up anywhere. However, if you fancy taking an alternative look at the Wicked Witch of the West, try Dorothy Must Die. This is a much darker series of books set after the original Wizard of Oz story. Dorothy has returned to Oz and is ruling with an iron fist. This has lead Amy Gumm, the other girl from Kansas, to join the Revolutionary Order of the Wicked and train to hunt down the woman in the ruby slippers. A riveting and dark tale on a childhood favourite, and also the inspiration for an easy costume!

Listening Books members can download and stream Dorothy Must Die.

The 'anything can be a zombie' one: Apocalypse Cow - Michael Logan

This time of year is perfect for recycling an old fancy dress costume by adding some blood and calling it a zombie. We've all seen a zombie fairy, zombie builder, or a zombie accountant. Why not take inspiration from Apocalypse Cow and take it one step further?

The novel, which won the first ever Terry Pratchett award, beings with scientists accidentally releasing a bio-weapon onto Britain. This transforms the animals into bloodthirsty, undead creatures, including cows. It's a hilarious listen, following three unlikely teenagers who become the saviours of the country.

However, if you want to dress up as a zombie cow for Halloween, you had better get a moo-ve on. Sorry, that pun was an udder disgrace. I'll stop milking it now.

What are your favourite halloween costume ideas from books? Let us know in the comments!