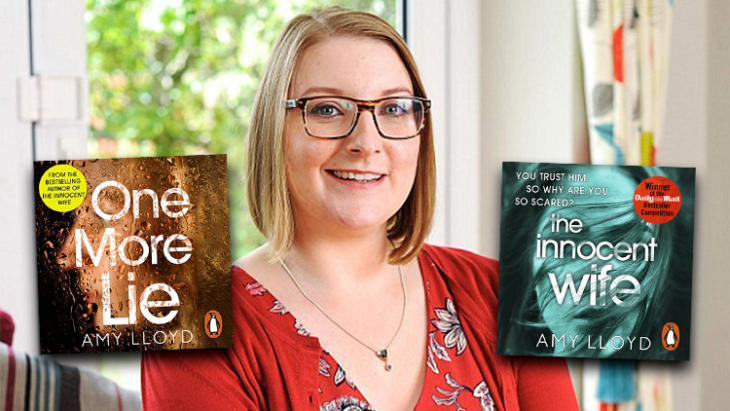 Amy Lloyd is the bestselling author of two novels. Her debut, The Innocent Wife, was published after she won the Daily Mail Bestseller Competition in 2016. It went on to become a Sunday Times bestseller, and was a 2018 Richard and Judy Book Club pick. Her second book, One More Lie, was published as an ebook in February 2019, and will be available as a hardback and audiobook in April.

Abigail Jaggers spoke to her about true crime documentaries, women who defy stereotyping, and the power of social media.

Tell Us A Bit About Your First Book, The Innocent Wife:

She's in a relationship with a man on death row in Florida...

Are You A Big Fan of True Crime?

I was quite a creepy little goth teenager!

How Did Modern True Crime Influence the Novel?

I think they all have good intentions, essentially

How Does The Online World Affect the Storyline?

How easy was it to Create The Main Characters?

I had to tune into a place that I haven't been in for a very long time, since I was a teenager

What Inspired the Relationship Between Dennis and Sam?

Ted Bundy had lots of women who just adored him

Sam has been called an 'Unlikeable Character'. Why Do You Think This Is?

We want, quite rightly, to have strong female characters, who we feel reflect the best of what women can be

Does Sam's Character Change Through the Novel?

Now she feels like she holds the power, instead of him

Did You Make Any Major Changes to the Book Through Drafts?

They told me to make Sam slightly less annoying!

Was it More Difficult to Write Your Second Novel?

It is more of a team effort than you think it is!

Did You Enjoy Watching the Audiobook Recording?

Until that point, I was pretty certain I was going to narrate book number two

Do You Enjoy Audiobooks?

The remarkable thing about audiobooks is you can do other things while you're reading them!

What Can You Tell Us About One More Lie?

Thank you very much to Amy Lloyd for speaking to us! If you would like to find out more about, check out her page on the Penguin Books website, or her Twitter.

As we come to the end of Disability Pride Month, we're looking at audiobooks that feature disabled main characters. From physical disabilities to learning disabilities to mental health conditions, find the collection by clicking the link in our bio!⁠
⁠
ID: a white background with audiobooks placed diagonally on the bottom and blue text above that reads Audiobooks with a Disabled Main Character. The audiobook covers that can be seen are: The Kiss Quotient by Helen Hoang, All The Light We Cannot See by Anthony Doerr, Not If I See You First by Eric Lindstrom, The War That Saved My Life by Kimberley Brubaker Bradley, Wonder by R J Palacio. ⁠
⁠
#DisabilityPrideMonth #audiobooks #audiobook #ListeningBooks #audiobookstagram #booksbooksbooks #bibliophile #TheKissQuotient #HelenHoang #AllTheLightWeCannotSee #AnthonyDoerr #NoIfISeeYouFirst #EricLindstrom #Wonder #RJPalacio #TheWarThatSavedMyLife #KimberleyBr...ubakerBradley