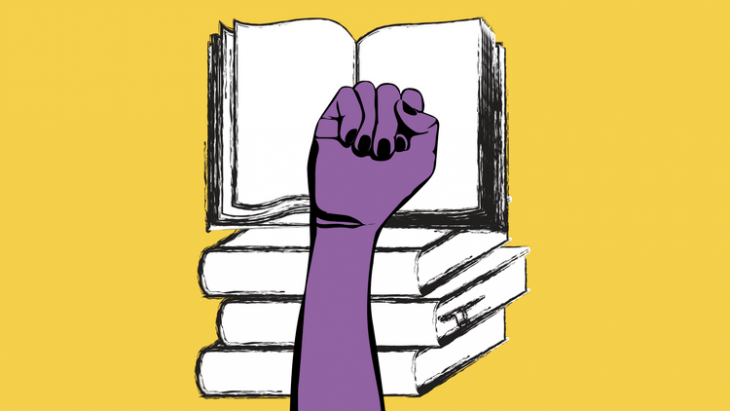 Did you know that many books considered classics were once banned?

This year, the UK is celebrating Banned Books Week to highlight the history of censorship. One of the most famous examples is Lady Chatterley's Lover by D. H. Lawrence. The book was famously banned in the UK because of its explicit content. In 1960, Penguin Books won a court case to publish it due to the 'Obscene Publications Act'. This act said that any book considered obscene but with "redeeming social merit" could be published. After six days, the jury found the book was not obscene. It sold out across the UK on the first day of publication, with 200,000 copies bought. Almost 60 years on, this is considered a landmark case that represented the end of an era.

Banned Books Week started in the USA in 1982 due to a dramatic increase in challenges to books in schools, libraries and bookshops. Banning books like Lady Chatterley's Lover seems like a thing of the past, but it is still happening today. Every year the American Library Association releases a list of the top 10 most challenged books. These have included everything from classics to Fifty Shades of Grey, The Curious Incident of the Dog in the Night Time, and The Bible in 2015.

To mark Banned Books Week, all you have to do is read a banned book! Here are some of our favourites for you to choose from:

Angus, Thongs and Full-Frontal Snogging is the introduction to Georgia Nicholson. She writes a diary about her teenage difficulties, including going to a party dressed as a stuffed olive and accidentally shaving off half an eyebrow. However, it has often been challenged due to Georgia's language and obsession with boys, especially Robbie the Sex God. Nonetheless, if you like Bridget Jones Diary, you will definitely want to see what the fuss is all about!

The Curious Incident of the Dog in the Night-Time: Mark Haddon

The Curious Incident of the Dog in the Night-Time is the story of Christopher Boone, a fifteen-year-old boy with an Autism Spectrum condition. After he discovers his neighbours dog has been killed he sets out to find the murderer. You would be forgiven for thinking that this book could not be that controversial! After all, it is a bestseller and has been turned into a theatre production.  However, a school in Florida took this book off their reading list due to offensive language. In response, Mark Haddon said, "Christopher is completely unaware of the offence that swearing is intended to cause and therefore it simply washes over him".

Listening Books members can borrow The Curious Incident of the Dog in the Night-Time on MP3 CD number 09406.

Ironically, The Handmaid's Tale features a scene where the narrator remembers burning magazines. This is portrayed as a pivotal to the overthrowing of America by a religious group, where women are stripped of their money, property and jobs, and forbidden from reading or writing. Fertile women are forced to become handmaids to powerful men, and even have their names changed. Margaret Atwood has said that she "would not include anything that human beings had not already done in some other place or time." Despite this, complaints about the book include profanity, sexual content, and violence.

Listening Books members can download or stream The Handmaid's Tale.

Alice's Adventures in Wonderland is an internationally famous classic. When it was published in 1865, some of the first readers were Queen Victoria and Oscar Wilde. However, it has also been controversial. In 1931, it was banned in parts of China, with the Governor saying 'animals should not use human language, and it is disastrous to put animals and human beings on the same level.' This is definitely one of the weirder reasons a book has been banned!

In Slaughterhouse Five, Billy Pilgrim survives the bombing of Dresden during World War II. He is then captured by aliens and becomes stuck in a time loop where he has to relive the horrors of war. The book has been banned or challenged 18 times since being published in 1969. It's most recent ban was only in 2011. Complaints mostly include the book's profanity and explicit sexual content. However, it is also historically vital, as it was the first book to acknowledge that the Nazi Holocaust targeted gay men and women.

In Philip Pullman's His Dark Materials Lyra Belacqua and Will Parry live in two parallel dimensions. Lyra's world is populated by animal daemons, who represent a persons inner self. The trilogy has stirred up a fair bit of controversy.  It is listed as the eighth most challenged or banned book between 2000 and 2009. The reasons cited include the trilogy's violence and politics. The Catholic League has also targeted the series specifically, saying it promotes atheism. Despite this, it is still one of the UK's most popular series of books. With a BBC TV series in the works, and a prequel due out this year, this is the perfect time to revisit them!

Listening Books members can download or stream His Dark Materials. Members can also borrow the MP3 CDs: Northern Lights - 08529, The Subtle Knife - 08542 and The Amber Spyglass - 08558.

What book are you planning on listening to for Banned Books Week? Let us know in the comments!

Inspired to listen to more banned books? Check out our full library list!

If you enjoyed this post, you may also like Down With This Sort of Thing: Banned Books You Can Listen To.