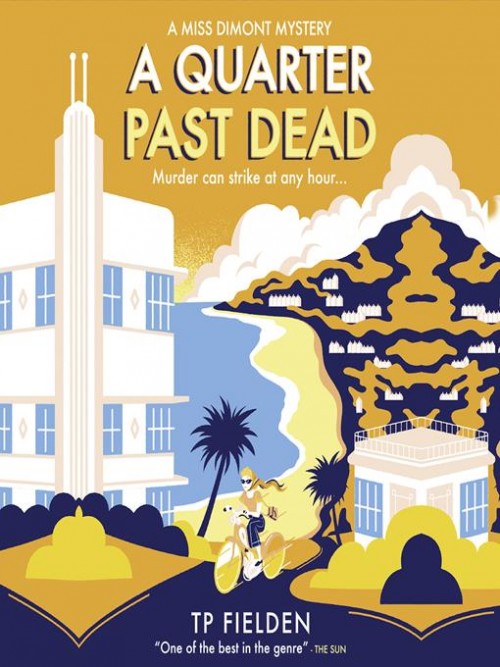 A Miss Dimont Mystery Book 3: A Quarter Past Dead


Murder can strike at any hour....It's the late 1950s in tranquil Temple Regis, Devon. For holidaymakers it's a glorious time of breathtaking scenery, picnics on beaches, and flocks of tourists on their summertime holidays. But for Miss Judy Dimont, this is all a trifle dull. As a reporter for local rag, The Riviera Express, she needs scandal and intrigue - and one morning, as the clock strikes the quarter hour, she gets it. A woman has been shot dead in one of Buntorama's upmarket holiday huts, the toffee-nosed rival hotelier next door is rubbing his hands with glee, and Judy and her trusty moped, Herbert, are off like a shot to survey the scene of the crime. But nobody can tell her who the dead girl is, and there's no clear motive. To have a story to write, Judy must solve the case - and the intrepid Miss Dimont will leave no pebble unturned until the truth is revealed.

Death stalks the beaches of Devon. With its pale, aquamarine waters and golden sands, the shoreline at Temple Regis was a sight to behold. But when an unidentifiable body is found there one morning, the most beautiful beach in Devon is turned into a crime scene. For Miss Dimont - ferocious defender of free speech, champion of the truth and ace news...

Gerald Hennessey - silver-screen star and much-loved heartthrob - never quite makes it to Temple Regis, the quaint Devonshire seaside town on the English Riviera. Murdered on the 4.30 from Paddington, the loss of this great man throws Temple Regis' community into disarray. Not least Miss Judy Dimont, corkscrew-haired reporter for the local rag, The...