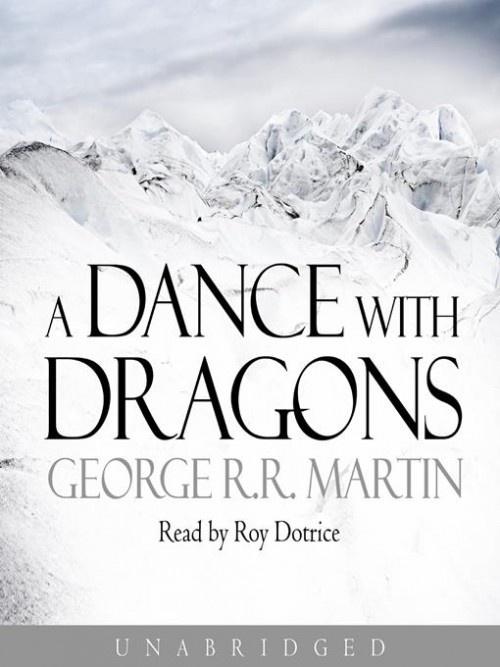 A Song of Ice and Fire Series Book 5: A Dance With Dragons


The future of the Seven Kingdoms hangs in the balance. In the east, Daenerys rules as queen of a city built on dust and death, beset by enemies. Now that her whereabouts are known many are seeking Daenerys and her dragons. Among them the dwarf, Tyrion Lannister, who has escaped King's Landing with a price on his head, wrongfully condemned to death for the murder of his nephew, King Joffrey. But not before killing his hated father, Lord Tywin. To the north lies the great Wall of ice and stone - a structure only as strong as those guarding it. Eddard Stark's bastard son Jon Snow has been elected the 998th Lord Commander of the Night's Watch, but he has enemies both in the Watch and beyond the Wall, where the wildling armies are massing for an assault. On all sides bitter conflicts are reigniting, played out by a grand cast of outlaws and priests, soldiers and skinchangers, nobles and slaves. The tides of destiny will inevitably lead to the greatest dance of all....

A Song of Ice and Fire Series Book 3: A Storm of Swords

A Song of Ice and Fire Series Book 3: A Storm of Swords

The Seven Kingdoms are divided by revolt and blood feud, and winter approaches like an angry beast. Beyond the Northern borders, wildlings leave their villages to gather in the ice and stone wasteland of the Frostfangs. From there, the renegade Brother Mance Rayder will lead them South towards the Wall. Robb Stark wears his new-forged crown in the...

A thrilling collection of twenty-one original stories by an all-star list of contributors-including a new A Game of Thrones story by George R. R. Martin! If you're a fan of fiction that is more than just black and white, this latest story collection from #1 New York Times bestselling author George R. R. Martin and award-winning editor Gardner Dozoi...

A Knight of the Seven Kingdoms

A Knight of the Seven Kingdoms

A Knight of the Seven Kingdoms compiles the first three official prequel novellas to George R. R. Martin's ongoing masterwork, A Song of Ice and Fire. Before Tyrion Lannister and Podrick Payne, there were Dunk and Egg. A young, na‹ve but courageous hedge knight, Ser Duncan the Tall towers above his rivals - in stature if not experience. Tagging alo...

A Song of Ice and Fire Series Book 2: A Clash of Kings

A Song of Ice and Fire Series Book 2: A Clash of Kings

Throughout Westeros, the cold winds are rising. From the ancient citadel of Dragonstone to the forbidding lands of Winterfell, chaos reigns as pretenders to the Iron Throne of the Seven Kingdoms stake their claims through tempest, turmoil and war. As a prophecy of doom cuts across the sky - a comet the colour of blood and flame - five factions stru...