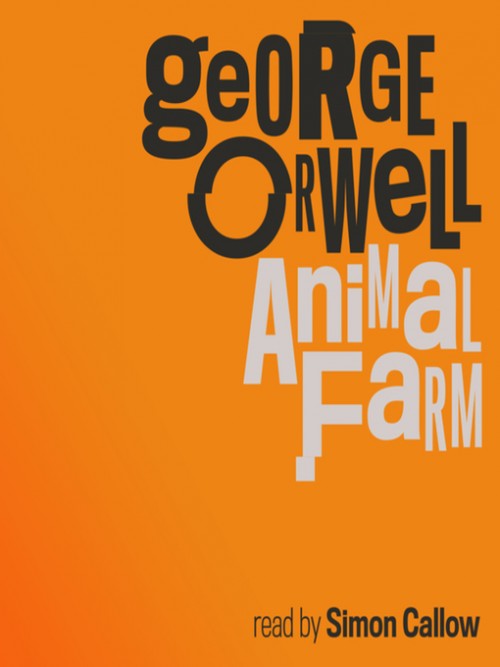 
The animals in the farmyard decide that working for humans is doing them no favours, so under the leadership of Napoleon, the only Berkshire Boar on the farm, and the other pigs, they drive out the farmer and his cohorts and set about structuring their own society. Based on a list of supposedly animal-friendly rules such as "four legs good, two legs bad" the animals work together to harvest their own food and run their own farm. However, little by little, the rules begin to mysteriously change and the pigs seem to gain power little by little, making the animals question what society they were striving for in the first place and whether their new-found freedom is as liberating as they might have hoped. With direct allusions to political figures such as Lenin, Marx, Trotsky, Stalin and Molitov, to name but a few, Animal Farm is one of the greatest socio-political works of all time, and this UNABRIDGED audio does it absolute justice.

Nineteen Eighty-Four is a classic dystopian novel by English author George Orwell. Published in 1949, it is set in the eponymous year and focuses on a repressive, totalitarian regime. The story follows the life of one seemingly insignificant man, Winston Smith, a civil servant assigned the task of falsifying records and political literature, thus e...

Coming Up for Air is a moving account of one man's attempt to recapture the innocence of childhood as war gravitates on the horizon.George Bowling is forty-five, married with children, working as a suburban insurance salesman, and desperate to escape London. It's 1939 and the Second World War is imminent. Forseening the chaos it will bring George d...

Having got rid of their human master, the animals of Manor Farm look forward to a life of freedom and plenty. But as a clever, ruthless elite among them takes control, the other animals find themselves hopelessly ensnared in the old ways. Orwell's classic tale of power and corruption is an allegory of the Russian Revolution.

Hidden away in the Record Department of the sprawling Ministry of Truth, Winston Smith skilfully rewrites the past to suit the needs of the Party. Yet he inwardly rebels against the harsh totalitarian world he lives in, which demands absolute obedience and controls him through the all seeing telescreens and the watchful eye of Big Brother, symbolic...

A searing account of George Orwell's observations of working-class life in the bleak industrial heartlands of Yorkshire and Lancashire in the 1930s. Graphically unforgettable descriptions of social injustice, cramped slum housing, dangerous mining conditions, hunger and unemployment are written with unblinking honesty, fury and great humanity. It c...