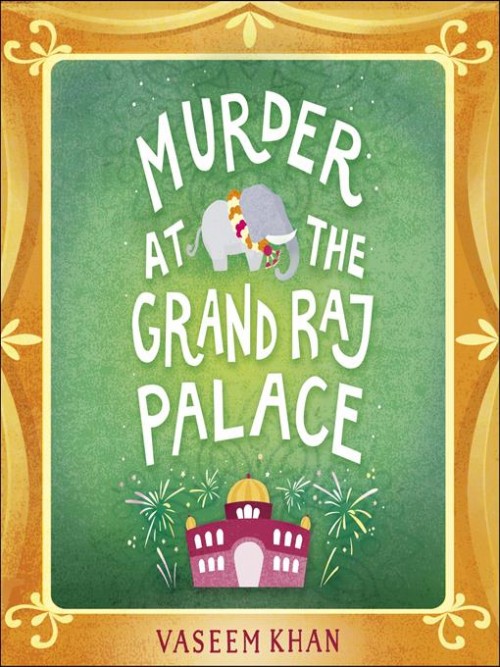 
In the enchanting new Baby Ganesh Agency novel, Inspector Chopra and his elephant sidekick go undercover to investigate a murder at Mumbai's grandest hotel. For a century the iconic Grand Raj Palace Hotel has welcomed the world's elite. From film stars to foreign dignitaries, anyone who is anyone stays at the Grand Raj. The last thing the venerable old hotel needs is a murder...When American billionaire Hollis Burbank is found dead - the day after buying India's most expensive painting - the authorities are keen to label it a suicide. But the man in charge of the investigation is not so sure. Chopra is called in - and discovers a hotel full of people with a reason to want Burbank dead.

On the day he retires, Inspector Ashwin Chopra inherits two unexpected mysteries. The first is the case of a drowned boy, whose suspicious death no one seems to want solved. And the second is a baby elephant. As his search for clues takes him across the teeming city of Mumbai, from its grand high-rises to its sprawling slums and deep into its murky...

In the gripping new Baby Ganesh Agency novel, Inspector Chopra and his elephant sidekick investigate the death of one of Mumbai's wealthiest citizens, a murder with ramifications for its poorest. The Parsees are among the oldest, most secretive and most influential communities in the city: respected, envied and sometimes feared. When prominent indu...

Mumbai thrives on extravagant spectacles and larger-than-life characters. But even in the city of dreams, there is no guarantee of a happy ending. Rising star and incorrigible playboy Vikram Verma has disappeared, leaving his latest film in jeopardy. Hired by Verma's formidable mother to find him, Inspector Chopra and his sidekick, baby elephant Ga...

Baby Ganesh Detective Agency Series Book 2: The Perplexing Theft of the Jewel In the Crown

Baby Ganesh Detective Agency Series Book 2: The Perplexing Theft of the Jewel In the Crown

For centuries the Koh-i-Noor diamond has set man against man and king against king. Now part of the British Crown Jewels, the priceless gem is a prize that many have killed to possess. So when the Crown Jewels go on display in Mumbai, security is everyone's principal concern. And yet, on the very day Inspector Chopra visits the exhibition, the diam...