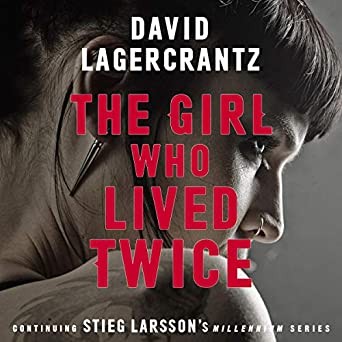 Lisbeth Salander--the fierce, unstoppable girl with the dragon tattoo--has disappeared. She's sold her apartment in Stockholm. She's gone silent electronically. She's told no one where she is. And no one is aware that at long last she's got her primal enemy, her twin sister, Camilla, squarely in her sights.

Mikael Blomkvist is trying to reach Lisbeth. He needs her help unraveling the identity of a man who lived and died on the streets in Stockholm--a man who does not exist in any official records and whose garbled last words hinted at possible damaging knowledge of people in the highest echelons of government and industry. In his pocket was a crumpled piece of paper with Blomkvist's phone number on it.

Once again, Salander and Blomkvist will come to each other's aid, moving in tandem toward the truths they each seek. In the end, it will be Blomkvist--in a moment of unimaginable self-sacrifice--who will make it possible for Lisbeth to face the most important battle of her life, and, finally, to put her past to rest.

Lisbeth Salander is a wanted woman. Two Millennium journalists about to expose the truth about sex trafficking in Sweden are murdered, and Salander's prints are on the weapon. Her history of unpredictable and vengeful behaviour makes her an official danger to society - but no-one can find her. Mikael Blomkvist, Millennium magazine's legendary star...

Millennium Series Book 5: The Girl Who Takes An Eye For An Eye

Millennium Series Book 5: The Girl Who Takes An Eye For An Eye

Sentenced to two months in Flodberga women's prison for saving a young boy's life, Lisbeth Salander refuses to say anything in her own defence. She has more important things on her mind. Mikael Blomkvist makes the long trip to visit every week - and receives a lead to follow for his pains. For him, it looks to be an important expose for Millennium....

The beginning of the original Millennium trilogy. Forty years ago, Harriet Vanger disappeared from a family gathering on the island owned and inhabited by the powerful Vanger clan. Her body was never found, yet her uncle is convinced it was murder - and that the killer is a member of his own tightly knit but dysfunctional family. He employs disgrac...