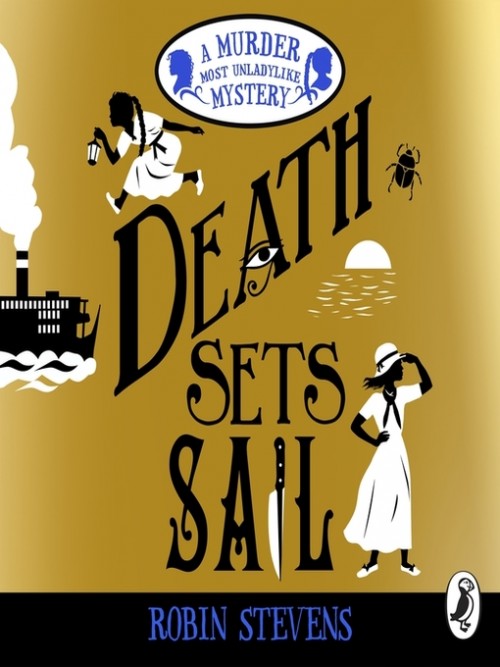 Daisy Wells and Hazel Wong are in Egypt, where they are taking a cruise along the Nile. They are hoping to see some ancient temples and a mummy or two; what they get, instead, is murder.

Also travelling on the SS Hatshepsut is a mysterious society called the Breath of Life: a group of genteel English ladies and gentlemen, who believe themselves to be reincarnations of the ancient pharaohs. Three days into the cruise their leader, Theodora Miller, is found dead in her cabin, stabbed during the night. It soon becomes clear to Daisy and Hazel that Theodora's timid daughter Hephzibah, who is prone to sleepwalking, is being framed. And within the society, everyone has a reason to want Theodora dead...

Daisy and Hazel leap into action and begin to investigate their most difficult case yet. But there is danger all around, and only one of the Detective Society will make it home alive...

Murder Most Unladylike Book 6: A Spoonful of Murder

Murder Most Unladylike Book 6: A Spoonful of Murder

Puffin Presents the audiobook edition of A Spoonful of Murder by Robin Stevens, read by Katie Leung. When Hazel Wong's beloved grandfather passes away, Daisy Wells is all too happy to accompany her friend (and Detective Society Vice President) to Hazel's family estate in beautiful, bustling Hong Kong. But when they arrive they discover something th...

When Daisy Wells and Hazel Wong set up their very own secret detective agency at Deepdean School for Girls, they struggle to find any truly exciting mysteries to investigate. (Unless you count the case of Lavinia's missing tie. Which they don't.) Then Hazel discovers the Science Mistress, Miss Bell, lying dead in the Gym. She assumes it was a terri...

Murder Most Unladylike 2: Arsenic For Tea

Murder Most Unladylike 2: Arsenic For Tea

Schoolgirl detectives Daisy Wells and Hazel Wong are at Daisy's home, Fallingford, for the holidays. Daisy's glamorous mother is throwing a tea party for Daisy's birthday, and the whole family is invited, from eccentric Aunt Saskia to dashing Uncle Felix. But it soon becomes clear that this party isn't really about Daisy at all. Naturally, Daisy is...

Penguin presents, the unabridged, downloadable, audiobook edition of Jolly Foul Play by Robin Stevens, read by Katie Leung. The fantastic new mystery from the author of Murder Most Unladylike. Daisy Wells and Hazel Wong have returned to Deepdean for a new school term, but nothing is the same. There's a new Head Girl, Elizabeth Hurst, and a team of...

Penguin presents the unabridged, downloadable audiobook edition of Mistletoe and Murder by Robin Stevens, read by Katie Leung. Daisy Wells and Hazel Wong are spending the Christmas hols in snowy Cambridge. Hazel has high hopes of its beautiful spires, cosy libraries and inviting tea-rooms - but there is danger lurking in the dark stairwells of anci...

Brought to you by Puffin. Daisy and Hazel are finally back at Deepdean, and the school is preparing for a most exciting event: the fiftieth Anniversary. Plans for a weekend of celebrations are in full swing. But all is not well, for in the detectives' long absence, Deepdean has changed. Daisy has lost her crown to a fascinating new girl - and many...

Murder Most Unladylike Book 7: Death In the Spotlight

Murder Most Unladylike Book 7: Death In the Spotlight

Penguin presents the audiobook edition of Death in the Spotlight by Robin Stevens, read by Katie Leung. Someone is about to take their final bow . . . Fresh from their adventures in Hong Kong, Hazel Wong and Daisy Wells return to England. But they're not going straight back to school - first they're staying with Daisy's uncle Felix in his London fl...

Penguin presents, the unabridged, downloadable, audiobook edition of First Class Murder by Robin Stevens, read by Gemma Chan. Daisy Wells and Hazel Wong are taking a holiday on the world-famous Orient Express - and it's clear that each of their fellow first-class passengers has something to hide. Even more intriguing: there is rumour of a spy in th...

Penguin presents the audiobook edition of The Guggenheim Mystery by Robin Stevens, read by Jason Forbes. Based on an idea and characters by Siobhan Dowd. My name is Ted Spark. Three months ago, I solved the mystery of how my cousin Salim disappeared from a pod on the London Eye. This is the story of my second mystery. This summer, I went on holiday...