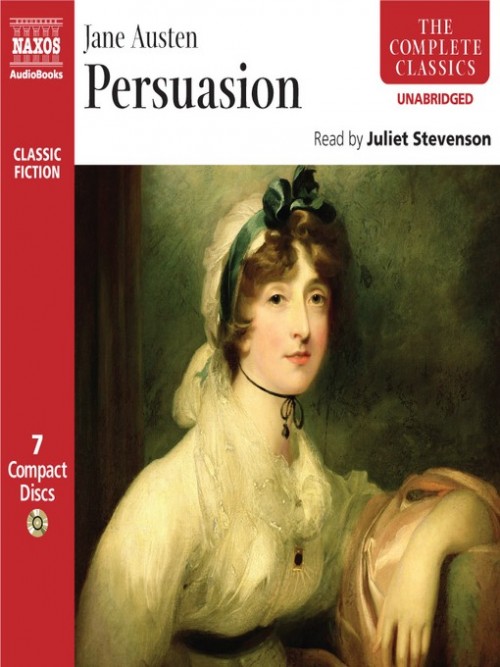 
When the personable Captain Wentworth reappears in Anne Elliot's life several years after she had been persuaded to break off their engagement, he makes no secret of his angry indignation but, as they come to know each other again, their feelings are rekindled. There are many obstacles in their path, however, amongst them Anne's egotistical, snobbish father, Sir Walter and his heir, the duplicitous Wiliam Elliot. Jane Austen's last completed novel sees her usual deft social comedy threaded with a more serious note. A love story of second chances and reconciliation, Janet Suzman expresses both wit and tenderness in this BBC Radio 4 Woman's Hour reading.

"It is a truth universally acknowledged, that a single man in possession of a good fortune, must be in want of a wife." When Mr Darcy comes to stay with his friend Bingley at Netherfield, Lizzie Bennet is as repulsed by his arrogance and pride as he is by her younger sisters and her mother. Their unusual and antagonistic courtship foems a warmly pe...

Arrogant, self-willed and egotistical, Emma is Jane Austen's most unusual heroine. Her interfering ways and inveterate matchmaking are at once shocking and comic. She is `handsome, clever and rich' and has `a disposition to think too well of herself'. When she decides to introduce the humble Harriet Smith to the delights of genteel society and to f...

Lady Susan was the first of Jane Austen's novels to be completed. An epistolary novel in 18th century style, it tells the story of the recently widowed Lady Susan Vernon, intelligent but highly manipulative, who is intent on gaining financially secure relationships for both herself and her wayward but shy teenage daughter Frederica. Less known than...

When Mrs Dashwood is forced by an avaricious daughter-in-law to leave the family home in Sussex, she takes her three daughters to live in a modest cottage in Devon. For Elinor, the eldest daughter, the move means a painful separation from the man she loves, but her sister Marianne finds in Devon the romance and excitement which she longs for. The c...

Emma is used to ruling over the social lives of those living in Highbury, but she has a lesson to learn about trying to co-ordinate other people's lives and actions a little too much. Emma is an exquisitely crafted portrait of late 18th century society, generally considered to be Austen's most accomplished work. Set within the confines of a Surrey...

Elizabeth Bennet is a spirited young woman with four sisters and a mother obsessed with getting them all married off. When she first meets Fitzwilliam Darcy she thinks he's arrogant and conceited, and he is completely indifferent to her charms. Will they ever see past the prejudices of their first impressions?

Fanny Price's rich relatives offer her a place in their home so that she can be properly brought up. However, Fanny's childhood is a lonely one as she is never allowed to forget her place. Her only ally is her cousin Edmund. When her cousins befriend two glamorous new young people who have arrived in the area, Henry and Mary Crawford, Edmund starts...

Helen Johns reads some fascinating early writings by Jane Austen from the fictionalised A Collection of Letters. A prolific letter writer herself, in this collection we see how the budding writer is experimenting, and starting to explore the medium as a literary convention.