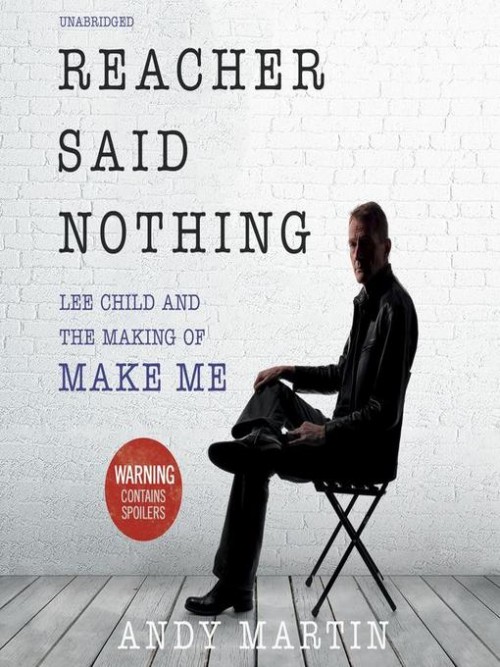 CategoriesAdult Non-Fiction, Music and the Arts


WARNING: CONTAINS SPOILERS On September 1, 1994, Lee Child went out to buy the paper to start writing his first novel, in pencil. The result was Killing Floor, which introduced his hero Jack Reacher. Twenty years later, on September 1, 2014, he began writing Make Me, the twentieth novel in his number-one- bestselling Reacher series. Same day, same writer, same hero. The difference, this time, was that he had someone looking over his shoulder. Andy Martin, uber Reacher fan, Cambridge academic, expert on existentialism, and dedicated surfer, sat behind Lee Child in his office and watched him as he wrote. While Lee was writing his Reacher book, Andy was writing about the making of Make Me. Reacher Said Nothing is a book about a guy writing a book. An instant meta-book. It crosses genres, by bringing a high-level critical approach to a popular text, and gives a fascinating insight into the art of writing a thriller, showing the process in real time. It may well be the first of its kind.

An Interview With Angela Chadwick

An Interview With Angela Chadwick

We speak to debut author Angela Chadwick about her award-winning novel, XX.

An Interview With Amy Lloyd

An Interview With Amy Lloyd

We chat to the author of popular thriller novels One More Lie and The Innocent Wife.

An Interview With Simon Lelic

An Interview With Simon Lelic

We speak to the author of the popular thriller novels The House and The Liar's Room. Photo credit Justine Stoddart.

An Interview With Sue Moorcroft

An Interview With Sue Moorcroft

We chat to the best-selling fiction author whose novels include Just for the Holidays and A Christmas Gift. Photo credit Charlotte Barnes.

An Interview With T.p. Fielden

An Interview With T.p. Fielden