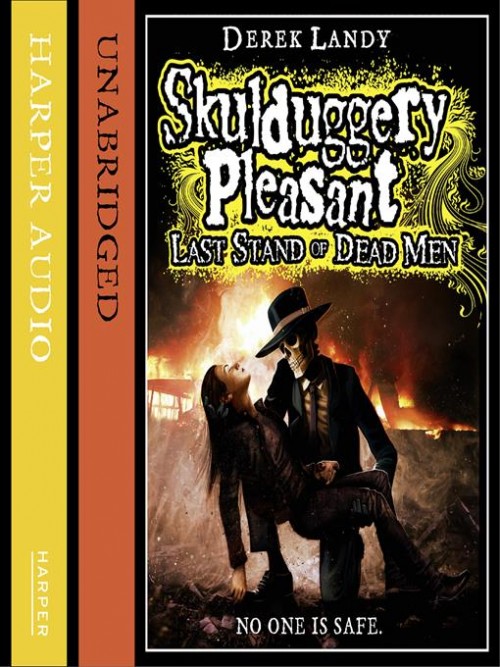 
The eighth instalment in the biggest, funniest, most thrilling comedy-horror-adventure series in the universe - and the follow-up to the number-one bestseller, Kingdom of the Wicked. War has finally come. But it's not a war between good and evil, or light and dark - it's a war between Sanctuaries. Allies turn to enemies, friends turn to foes, and Skulduggery and Valkyrie must team up with the rest of the Dead Men if they're going to have any chance at all of maintaining the balance of power and getting to the root of a vast conspiracy that has been years in the making. But while this war is only beginning, another war rages within Valkyrie herself. Her own dark side, the insanely powerful being known as Darquesse, is on the verge of rising to the surface. And if Valkyrie slips, even for a moment, then Darquesse will burn the world and everyone in it.

The 12th explosive novel in the internationally bestselling Skulduggery Pleasant series, Bedlam will blow your mind - and change everything...On a desperate journey to recover her sister's lost soul, Valkyrie Cain goes up against the High Sanctuary itself, and there's nothing Skulduggery Pleasant can do to stop her. With Abyssinia's grand plan abou...

For years, Valkyrie Cain has struggled to keep her loved ones safe from harm, plunging into battle - time and time again - by Skulduggery Pleasant's side, and always emerging triumphant. But now the very thing that Valkyrie fights for is in danger, as a ruthless killer snatches her little sister in order to lure Valkyrie into a final confrontation....

Skulduggery Pleasant and Valkyrie Cain are back - just in time to see their whole world get turned upside down. With Valkyrie struggling to protect her dark secret, Skulduggery and the gang are more vulnerable than ever, just as a plague of body-snatching Remnants are released upon the world.

With Serpine dead, the world is safe once more. At least, that's what Valkyrie and Skulduggery think, until the notorious Baron Vengeous makes a bloody escape from prison, and dead bodies and vampires start showing up all over Ireland. With Baron Vengeous after the deadly armour of Lord Vile, and pretty much everyone out to kill Valkyrie, the darin...

Skulduggery Pleasant is gone, sucked into a parallel dimension overrun by the Faceless Ones. If his bones haven't already been turned to dust, chances are he's insane, driven out of his mind by the horror of the ancient gods. There is no official, Sanctuary-approved rescue mission. There is no official plan to save him. But Valkyrie's never had muc...

The thirteenth thrilling novel in the internationally bestselling Skulduggery Pleasant series, SEASONS OF WAR will test the Skeleton Detective and Valkyrie like never before... War is coming. To avert catastrophe, Skulduggery and Valkyrie are sent on a secret mission that takes them away from everything they know, to a forsaken land of magic and gr...

The seventh instalment in the biggest, funniest, most thrilling comedy-horror-adventure series in the universe. Magic is a disease. Across the land, normal people are suddenly developing wild and unstable powers. Infected by a rare strain of magic, they are unwittingly endangering their own lives and the lives of the people around them. Terrified a...

Skulduggery, Valkyrie and Omen return in the 14th and penultimate novel in the internationally best-selling Skulduggery Pleasant series &ndash; and their most epic test yet. In a matter of days, the world will change. Billions of lives will be wiped away in a final, desperate search for the Child of the Faceless Ones &mdash; she who is destined to...

The FINAL shocking, heart-wrenching book in the jaw-droppingly stupendous Skulduggery Pleasant series. Valkerie. Darquesse. Stephanie. The world ain't big enough for the three of them. The end will come. The War of the Sanctuaries has been won, but it was not without its casualties. Following the loss of Valkyrie Cain, Skulduggery Pleasant must use...