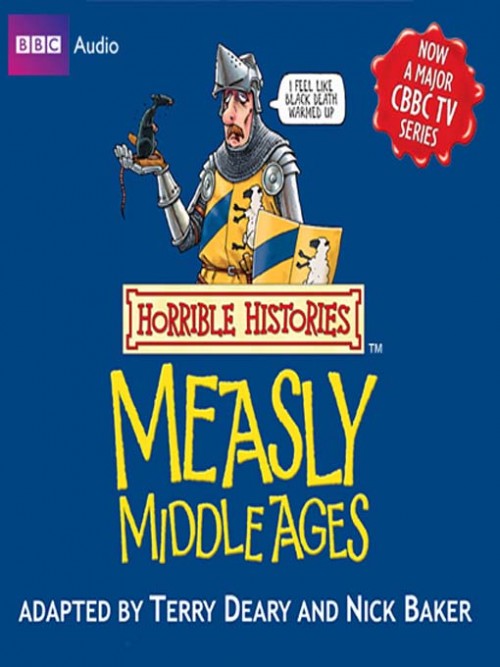 
Terry Deary and Martin Brown's brilliant books about the nastiest periods in history have now - with the help of some astounding actors and directed by Dirk Maggs - been transformed into a series of audio extravaganzas. Featuring new, extra material not found anywhere in the books, these sound spectaculars are just as thrilling and spilling, funny and fast as their printed counterparts. Horrible Histories are guaranteed to bring you history with the nasty bits left in! No other period in history (apart from most of the others) was as nasty as the Middle Ages. The peasants were revolting, the food was disgusting, and death lurked round every corner. The Knights might have been bold, but a lot of the women were bolder - take Joan of Arc, who had to dress up as a man to be taken seriously! Then there was the nerdy knight who pretended he was a woman in order to get his girl (but the beard was a bit of a giveaway). Learn the filfth, fear and torture your teacher never taught yer! Based on the bestselling books written by Terry Deary and illustrated by Martin Brown. Published by arrangement with Scholastic Ltd.

It's history with the nasty bits left in! Want to know: Why the Aztecs liked to eat scum? When the world is going to end? How to play a really violent ball game? Discover all the foul facts about the Angry Aztecs - all the gore and more!

Readers can discover all the foul facts about the Smashing Saxons, including who got cow pats as Christmas presents, why wearing a pig on your head is lucky and how to make a dead Saxon happy.

THE ROTTEN ROMANS: Want to know what the Roman soldiers wore underneath their kilts, or why rich Romans needed a vomitorium? Listen to find out the terrible tactics of the rotten Roman Army. THE WOEFUL SECOND WORLD WAR: Find out who made a meal out of maggots and which soldiers were so smelly their enemies could sniff them out. All the dire details...

Want to know: Why Druids split humans in half, how the Normans outwitted the Welsh with a lump of ham and how an army of Welsh mums fought off the French once and for all? With a bold, accessible new look and a heap of extra-horrible bits, these bestselling titles are sure to be a huge hit with yet another generation of Terry Deary fans.

A monster with fiery breath, a man kidnapped by a family of ape men, a beached sea monster. These are some of the strangest stories around but someone, somewhere, at some time has sworn that each of these stories is true. So even if you think you don't believe in monsters, beware!

Fascinating, frightening or just plain frustrating? These eight gripping stories show detective work as it really is - and sometimes truth can be stranger than fiction. Read about the ghostly dream that helped to solve a baffling murder mystery, some clever detectives' tricks that led to the conviction of the 'Laurel and Hardy' jewel thieves, and t...

Tudor Chronicles Book 1: The Prince of Rags and Patches

Tudor Chronicles Book 1: The Prince of Rags and Patches

Set in the last year of Queen Elizabeth's reign, two parallel stories are woven together as 13-year-old William Marsden, with the aid of Meg the serving girl, tracks down a murderer and puzzles over the part played by his great-great-grandfather in the deaths of the Princes in the Tower.

They're not called the Awesome Egyptians for nothing! The foul pharaohs and their suffering slaves got up to all sorts of terrible tricks. Read this book to... Meet some fabulous pharaohs... and their mummies. Make revolting recipes for 3000 year old sweets. Discover which king had the most blackheads. Find out why some pharaohs wore false beards....

Horrible Christmas is filled with all the festive facts every Horrible Histories reader wanted to know, but were too stuffed full of mince pies to ask! The complete horrible history of Christmas tells tales from the dark days when Puritans tried to abolish Christmas, to Christmas in the trenches when the British and Germans traded bullets for footb...

A collection of nine apparently true tales, including strange spirit stones that haunt an Australian farmstead, a young girl who avenges her own murder, and a restless mummy who walks abroad on Halloween.