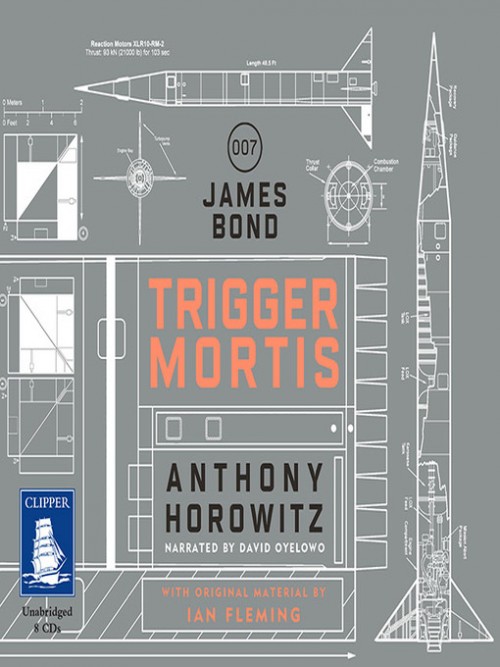 
It's 1957 and James Bond (agent 007) has only just survived his showdown with Auric Goldfinger at Fort Knox. By his side is Pussy Galore, who was with him at the end. Unknown to either of them, the USSR and the West are in a deadly struggle for technological superiority. And SMERSH is back. The Soviet counter-intelligence agency plans to sabotage a Grand Prix race at the most dangerous track in Europe, but it's Bond who finds himself in the driving seat and events take an unexpected turn when he observes a suspicious meeting between SMERSH's driver and a sinister Korean millionaire, Jai Seong Sin. Soon Bond is pitched into an entirely different race with implications that could change the world. Thrown together with American agent, Jeopardy Lane, Bond uncovers a plan that will bring the West to its knees in a heart-stopping climax. Welcoming back familiar faces, including M and Miss Moneypenny, international bestselling author Anthony Horowitz ticks all the boxes: speed, danger, strong women and fiendish villains, to reinvent the golden age of Bond in this brilliantly gripping adventure. TRIGGER MORTIS is also the first James Bond novel to feature previously unseen Ian Fleming material. This is James Bond as Fleming imagined him.

SKELETON KEY: The third book in the Alex Rider series. Reluctant superspy Alex Rider faces his most dangerous challenge yet. On a private island near Cuba, the power-hungry Russian General Sarov is hatching explosive plans to rewrite history. Alone, and equipped only with a handful of ingenious gadgets, Alex must combat sharks, assassins and nuclea...

The sixth book in the Alex Rider series. Alex Rider is in hospital and determined to put his spying days behind him - but the reluctant teenage superspy is forced into action once again when a group of deadly eco-terrorists breaks in. Suddenly Alex finds himself in the middle of a war that seems to be somehow connected to Ark Angel, a revolutionary...

The first book in the sinister, supernatural 'Power of Five' series. When Matt Freeman gets into trouble with the police, he's sent to be fostered in Yorkshire. It's not long before he senses that there's something wrong with his guardian - and with the whole village. Then Matt learns about the Old Ones and begins to understand just how he is diffe...

THE GAME'S AFOOT . . . It is November 1890 and London is gripped by a merciless winter. Sherlock Holmes and Dr Watson are enjoying tea by the fire when an agitated gentleman arrives unannounced at 221b Baker Street. He begs Holmes for help, telling the unnerving story of a scar-faced man with piercing eyes who has stalked him in recent weeks. Intri...

Sherlock Holmes is dead.Days after Holmes and his arch-enemy Moriarty fall to their doom at the Reichenbach Falls, Pinkerton agent Frederick Chase arrives in Europe from New York. The death of Moriarty has created a poisonous vacuum which has been swiftly filled by a fiendish new criminal mastermind who has risen to take his place. Ably assisted by...

When editor Susan Ryeland is given the tattered manuscript of Alan Conway's latest novel, she has little idea it will change her life. She's worked with the revered crime writer for years, and his detective, Atticus Pund, is renowned for solving crimes in the sleepy English villages of the 1950s. As Susan knows only too well, vintage crime sells ha...